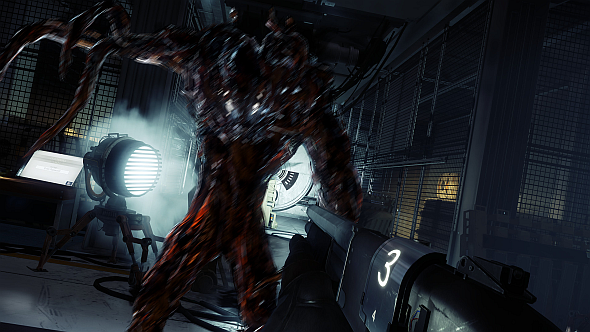 Update March 30, 2017: Arkane and Bethesda have released yet another trailer for Prey, this time showing you all the stuff you saw in yesterday’s trailer, albeit slightly differently.

This one shows off the neuromods, both from a lore perspective and their application in gameplay, from fiery blasts to morphing into household objects.

Can’t wait to stick a needle in your eye? Here’s everything we know about Prey so far.

Have a watch of the new trailer above, then watch yesterday’s below.

Today’s trailer features commentary from the developers at Arkane, who take you behind the scenes of the Neuromod Division and walk you through the fruits of their labour.

Some powers are non-alien in nature, but rather are massively enhanced human abilities such as hacking, shooting and repairing. Lead systems designer Seth Shain says the repair skill tree is one of his favourites, as it’ll let you take advantage of the station’s own defences – such as gun turrets – by fixing them up and turning them on your enemies.

Naturally though, there’s also a look at some of the more exciting alien powers, such as lift field, superthermal and so on.

If you missed it,here’s yesterday’s trailer, which shows off the ways in which guns will combine with your powers to create some clever emergent effects.