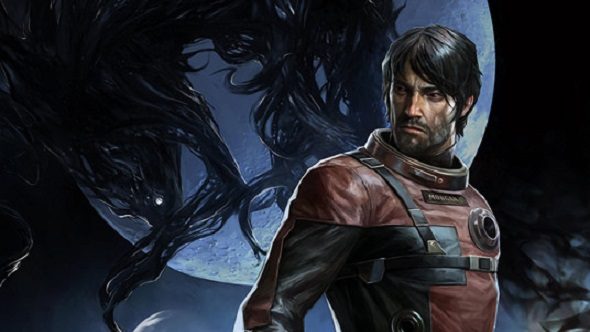 Arkane are all set to release their next game, Prey, in 2017. An immersive sim like Dishonored 2, Prey takes players to a single interconnected map: a space station called Talos 1. Up there in the stars, you’ll be taking on alien creatures and weaponising their own powers against them, as well as using makeshift weaponry that you chance upon. Arkane are now revealing some of that equipment, speaking about the powers and peeling back some of the mystery behind the inky alien threat.

Keep an eye on the industry with our upcoming PC games list.

Each alien you encounter on Talos 1 has its own behaviours and abilities, with some shapeshifting into everyday objects, just to heighten the paranoia. Of course, you can use their abilities, altering your DNA with a Neuromod scanner.

Upon activating these powers, players enter Psy mode and time temporarily slows to a crawl, giving you chance to deploy them without fumbling in panic because an ink alien is swiping weird tendrils at your face.

If you keep equipping Neuromods, you might get more than you bargained for, however. A creature called a Nightmare will be stalking you throughout the game, and the hulking thing can track you even more easily when you equip more powers.

Here are some of the powers you’ll be able to use:

Now, onto the weapons you’ll be using…

Lastly, Arkane have also revealed some of the alien creatures you’ll be fighting. Read on for more…

“They have the smallest minds,” says lead designer Ricardo Bare, via Game Informer. “They’re like a creature – like a fish – they’re very simple. They’re placed in these nests almost like mines, and they’re attracted to motion – anything like a physics object or a player running past them. [Outside of zero-g], they roll on the ground like a carpet of soccer balls chasing you.”

“They’re sort of the progenitors of the whole ecology,” Bare explains. “One Mimic can start the whole thing all over again, if just one survives. Whenever they duplicate, they’re sort of the scouts. After killing a human or any living thing, they sort of absorb their life force, and then they duplicate. And they repeat that process. Of course, in the game, their main function is to hide and ambush the player.”

“There are different kinds of Phantoms,” Bare says. “The later into the game you go, you start to see more variations on them. Some of it isn’t predetermined, some of it’s randomised, so you might have a different kind of Phantom than another player, which means you have different access to powers if you’re scanning aliens for powers.”

“It’s like a half-malformed, didn’t-quite-bake-long-enough Phantom,” Bare explains. “They’re weaker than the more advanced Phantoms but they’re about on the same level as the base Phantoms. They lurk around and sort of haunt an area and mess around with stuff and get in your head a little, and then wait for an opportunity to start throwing things at you and throw you into the air.”

“We don’t have anything like boss fights in the game, but because of the way the A.I. works, [Telepaths] feel like a miniboss,” Bare says. “He owns an area and typically has a cluster of humans that he’s taken over. The humans are interesting, because they are aware of the fact that they’ve been possessed, so if they see you they’ll say things like, ‘I can’t stop myself. Run, get away. We’re both going to die,’ that kind of thing. That presents the player with an interesting choice. Do I cap this person, but they’re actually a human being, or do I try to find a way to avoid them or take them down non-lethally?”

“The Nightmare was specifically created to kill you, because the Typhons recognise you as some kind of anomaly that’s resisting them and threatening their system,” Bare explains. “The more alien powers you install, the more it becomes aware of you and can track you down. That’s a dynamic system. So I can be in the cafeteria somewhere and jam 15 Neuromods into my eye, and all of a sudden hear this huge roar, and the Nightmare is in the level. He’s in the world, hunting you, but he doesn’t know where you are unless you stumble into him or do things like install a bunch of Neuromods.”