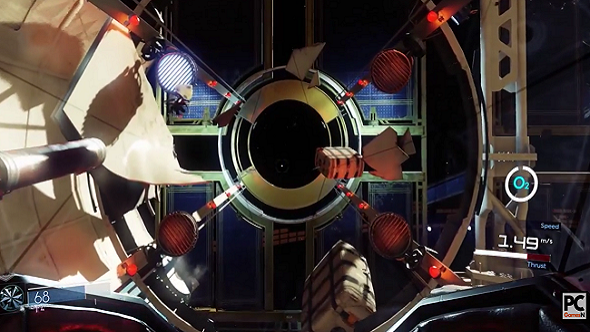 Arkane Studios revealed a big chunk of Prey gameplay at The Game Awards 2016, showing off their space-based immersive sim. There’s more than a hint of System Shock in its DNA.

Hit up the PCGamesN homepage for more Game Awards goss.

On a space station filled with shapeshifting aliens, you’ll never feel comfortable in Prey, by the looks of things. Anything could potentially be an enemy, be it a chair, a bin, or even a cup. You best either sneak by or give everything a just-in-case smack with your wrench as you stalk through the eerie halls.

It’s not just hitting everything with a wrench, though. Prey will sport a rather extensive RPG style upgrade system, continuing the play-your-way tradition of Dishonored. You can inject yourself in the eye to take on alien powers, conjuring fire out of thin air or transforming into a cup.

Everything has multiple uses too. Take the glue gun – yes, you get a massive, industrial glue gun – which you can use to cake enemies in the sticky stuff before shattering them, spray over pipes to stop flames spewing out, or trace a line up a wall to create a makeshift ledge to climb on.

The gameplay demonstration also showed a recycling grenade that can be used to clear rooms and turn them into components for crafting. At one point in the video, Arkane transform into one of these throwables and use another alien power to create a small explosion, using the force to propel them skyward, onto a seemingly out-of-reach ledge. It all looks very clever.

Later on, we’re also shown that it won’t be just tiny shapeshifters you’ll deal with. There’s also a towering creature called a Nightmare that makes short work of the player, even when they’re using a strength upgrade to fling boxes at them. Judging by the creepiness of the station, the brief space walks shown will be a welcome relief.

Prey is set to release in spring 2017. Check out nine minutes of Prey gameplay footage at GameInformer. You can also watch the brand new trailer embedded at the top of this page.