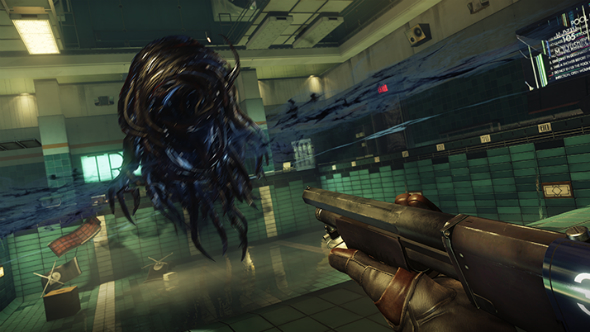 If you’re a huge fan of creatures that will haunt your nightmares for years to come, then good news: Bethesda and Arkane have a bumper bundle of them coming your way in the form of Prey. But before they let you get your hands on the game they want to introduce you to the inky black creatures you’ll be facing when Prey comes out on 5 May, 2017. Give it a watch above.

Want to know more about Arkane’s immersive sim? Check out our collection of everything we know about Prey.

Firstly, there’s Mimic, whose ability to turn into ordinary objects like chairs, lamps and mugs makes me question my office surroundings. It’s not just that your seat could be a creepy-crawly though, as according to an accompanying post on Bethesda’s site, Mimics also grow and multiply by feeding off people’s life essence. Sort of like a cross between a vampire and a spider, sorry for that image.

Next we’re introduced to Phantom, an almost human-shaped inky black figure that moves about at terrifying walking pace, huling damaging energy orbs at you as he goes. In close-quarters its limbs are lethal – charming. Finally, we meet Telepath, which looks like a floating, abyssal bee hive. It hurls a barrage of psychic attacks at you, and can control weaker beings.

If you want to see the very start of Prey, Bethesda have shown it off on their Twitch channel yesterday. The inspiration seems to have been that March 15 is the day (in 2032) when Morgan Yu wakes up to begin the game. There’s also a fairly obvious Groundhog Day theme thing going on in the plot in general, hence the loop. Watch it here.