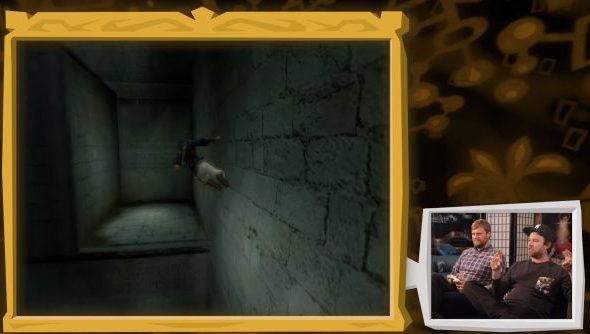 As part of their widening scope as people that just make… things…? Double Fine have a number of YouTube series they’ve done over time through Two Player Productions, the documentary team that helped create the videos that came with Broken Age. They’ve recently started the second season of a series where developers sit in on a short Let’s Play, explaining things about development, their thoughts on it and so on. It’s called Devs Play, and the latest episode involves Patrice Désilets talking about Prince of Persia: The Sands of Time.

Which of the best PC games ever would you like to see feature?

Greg Rice takes the time-reigns for the first bit of the game, whileDésilets comments on inspiration, genres and the rest.

The first season finished in January and while it would be impossible for me to get away without mentioning the Doom one with John Romero talking about one of the greatest games of all time, Psychonaut’s is far more interesting. They get Stephen “SMK” Kiazyk, a speedrunner, down to the Double Fine offices to show off just how broken Psychonauts can be to Tim Schafer et al.

This is brilliant, and if I could sit good speedrunners down with the developers of the games they run every week, I would. Even in a game with a single glitch that skips a lot of content it’s fascinating to see their reactions and hear the explanations for why certain skips work the way they do. Hopefully there’s another of these to come from Season 2.