When Prison Architect launched last week, it did so with a substantial new feature: Escape mode. No longer do we have to work for The Man, toiling away, constructing new prisons; instead we can break out of them. And that’s exactly what I attempted to do.

For my first daring escape, I decide to go all out, selecting a gargantuan, automated supermax as the site of my greatest act of sticking it to The Man. Soon, I will be free.

I have not broken out of anywhere since I was a teenager, sneaking out of my parents’ home for a sneaky cigarette, to solve crimes and to fight in an underground martial arts arena – regular kid stuff. What I lack in experience, however, I almost certainly make up for in an almost obstinate dedication to not being in prison. No walls will hold me.

And for this stretch in the joint, I am this guy: 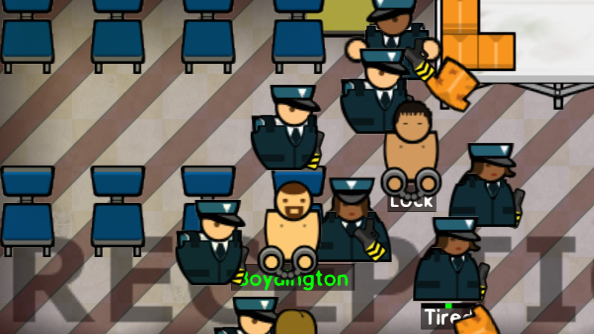 Boyd Boydington. Look at him with his little beard. Clearly an innocent man wronged by an unjust society.

Upon arriving at this swanky dungeon, I’m immediately escorted to my cell by one of the many, many guards. This allows me to do my first bit of recon, getting to grips with the prison layout. 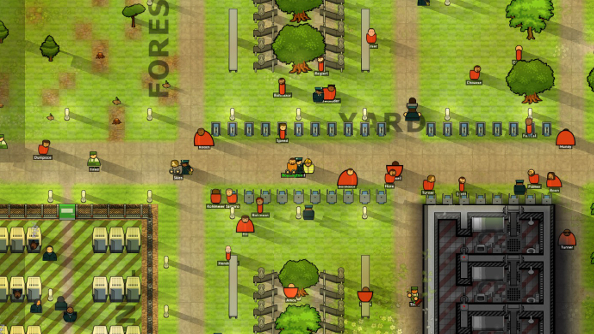 What a lovely yard. Shame I won’t be here long enough to enjoy this beautiful place.

I’m still being brought through the prison by the guard, and I’m entirely lost. This place is truly gargantuan, and the deeper I get inside it, the more my confidence wavers. It’s high-tech, bursting with guards, and it’s a labyrinthine maze full of thick, complicated doors.

After being stripped and given my new prison togs, I’m finally taken to my dingy little cell, home for hopefully only a short time. 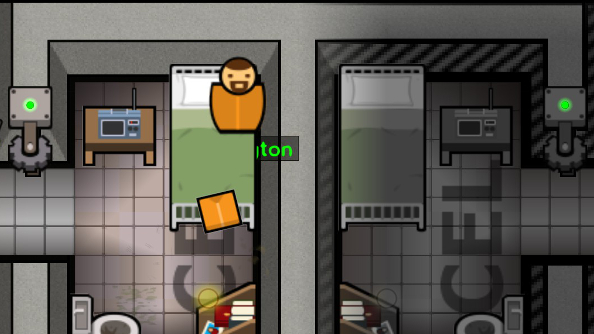 Escape mode lets you recruit other inmates into a gang, which I reckon might be quite helpful if I want to blow this place. I immediately spot a building-sized man and know that I must have him as a henchman.

I hit the wrong button, punch him in the face and a brawl ensues. With the help of several guards who have now intervened, I knock him unconscious. My first, albeit unplanned, victory! Lamentably this is short lived, as the guards turn their sticks on my tender skull.

I am now in solitary confinement. With all this extra time on my hands, I start planning my breakout.

With this prison being so dependent on its slick automation, it strikes me that a bold man would go straight to the heart of the beast, taking out the power and sauntering out the front door. For that, however, I’d probably need a weapon and some backup in case things go south.

Conveniently, mere moments after being let out of solitary, I bump into this strapping Irishman, Macauley. 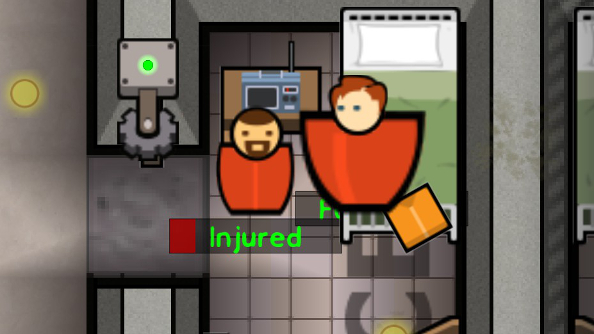 I’ve got a wee bit of rep after my scuffle with the guards, which I spend on recruiting him. We’re now best of friends and he follows me everywhere like a loyal dog.

So, I have my fall guy scapegoat important ally, but I still need a weapon. This is a prison, how hard could it be to find something I can use to damage a generator and maybe, if I’m lucky, assault someone? As Macauley and I stroll through the prison’s gorgeous yard, admiring the flora, we notice something that is most definitely not a plant. It’s an axe. It’s a bit conspicuous, and there’s a guard pretty close by, yet I pick it up and nobody seems to be any the wiser. Success. 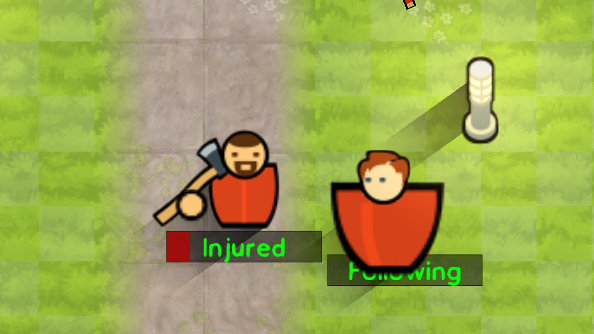 I can’t get into the generator room, but I can enter the library, which is right next door. Macauley hunts down a copy of the Hunger Games while I try to figure out what to do next. Axes are pretty good at breaking down doors, I recall from The Shining, but walls are a different matter. Still, I give it a go and, crikey, my axe goes straight through the wall and knocks out a capacitor.

The wall is intact, but my axe continues to slice through it, knocking out two more capacitors until the guards burst in. Tasers and sticks come out and I know that I won’t be able to escape now, not with only an axe to defend myself with. Loyal Macauley holds them off for a moment until he falls to the ground, unconscious. I’m next.

I wake up in solitary again, with poor Macauley, who has taken a serious beating, in the infirmary. 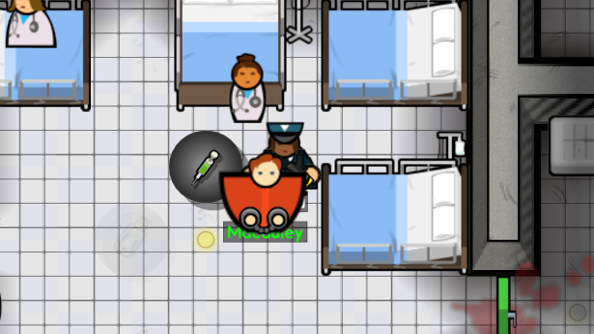 Ok, so I can’t defeat Skynet, but there is one place where I could be free of electronic doors and alarms: underground, crawling through the muck. After all, what’s a prison break without a great big tunnel snaking through the prison, ending in freedom?

I’d be a fool not to participate in such an important prison tradition. 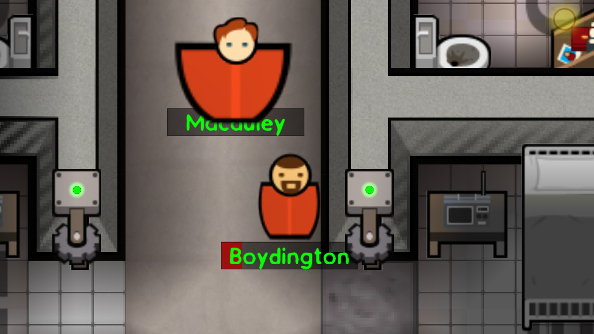 Unfortunately, the prison does not afford me easy access to diggers or drills – it would have to be something easier to procure and hide in the pocket of my fetching prison clobber. An ambitious man would look for a shovel, but not me. A spoon would be my tool of choice.

I found and pocketed a spoon pretty quickly and managed to avoid raising any suspicion by sneaking off while some guards brawled with some of my fellow cons.

Since I have myself a nice little gang due to quick recruitment drive in the shower earlier, I start to think it would be a good idea to get them some tools and make them help me out. After all, an escape attempt is only considered a success when all members of the gang have broken out of the prison.

Things are going well. This is going to be the one – the attempt that succeeds. I will breath the air of freedom soon. 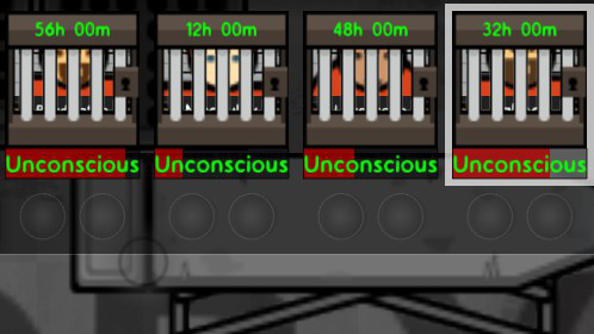 I don’t know what gave us away. Was it all the mud we had on our uniforms? Is someone a snitch? I’m in solitary again, and the paranoia is setting in.

I am surrounded by guards and CCTV cameras, my every step watched. I can’t even punch a bookcase without getting grabbed, shackled and tossed in a tiny cell. The bookcase wasn’t even hurt.

Here’s the thing, though: there might be a lot of guards, but they are kept pretty busy. I’ve been able to get away with a few indiscretions just because guards closeby were trying to handle other unruly inmates. If every guard is busy, then surely my chances of escape will increase considerably. 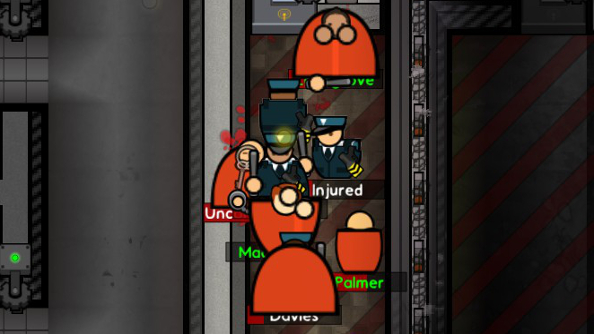 Only one problem: riots are a wee bit chaotic. It’s sort of in their nature. And just because the guards are fighting all of these prisoners, it doesn’t mean that I won’t be tased or struck by another inmate. I’d need to work out. My whole gang would need to.

Stats like toughness and speed can be increased by spending rep points, the same currency used to recruit new gang members. In the Darwinian world of the American prison system, rep is gained by being a maniac. This mostly involves punching things. 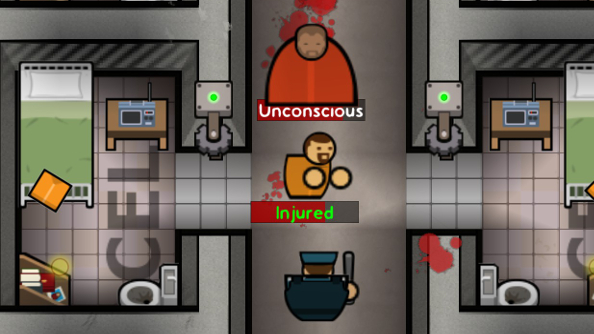 I punch a toilet. I punch a table. I punch a man and then I punch his friend. I punch every single showerhead I can find. I break into the library and punch all of the bookshelves. There is nothing in this prison that I have not introduced to my unrelenting fists.

I’m in solitary yet again, but I’ve accrued enough points to level up every stat twice – the maximum – for every member of my gang. I’ve grown fond of them, Macauley, the other big guy, that one bloke and his mate, the other one – they’ve been my closest friends and confidants during this trying time. And now we’re almost free. Again.

We kick off the riot by doing what we’ve proved to be extremely good at: we punch everyone. The prison erupts, violence spreading from one room to the next, the corridors slowly turning red as the blood of prisoners and guards gets smeared all over the floor. A fire breaks out, and all around me is a cacophony, a din of shouting men and barking dogs.

We do not escape. 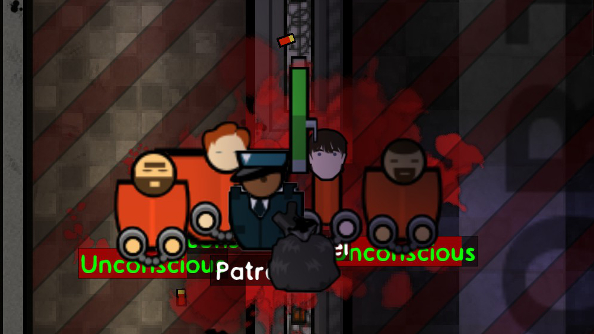 So close. So. Damn. Close. We even made it out of the prison, taking our first gulps of air in the outside world, and then they descended on us with tasers, hounds and guns. We could see the exit, but we just couldn’t quite make it.

When I wake up, my hundredth stint in solitary at an end, I’m surprised to find that the riot continues. If anything, it’s only escalated, and now at least a quarter of the prison has burned down entirely. 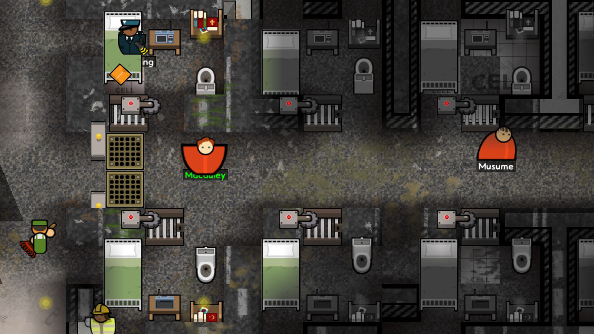 Prisoners are surging toward the main gate, like those ridiculous waves of zombies in the World War Z film. Behind them they leave a trail of dead and unconscious guards, and a few of their own. There’s no way the guards can stop everyone, I think to myself before gathering up my gang for one last brave attempy.

Like mythical heroes we charge boldly at the gate. Ignoring the fights, avoiding the corpses, we run with laser focus, determined to escape.

We’re out the door now, in the middle of a battle between guards and prisoners. Guns and tasers go off behind us, Macauley gets hit, but he’s up again, he’s still running. I cross the line, I’m out, so is Macauley, and then the rest.