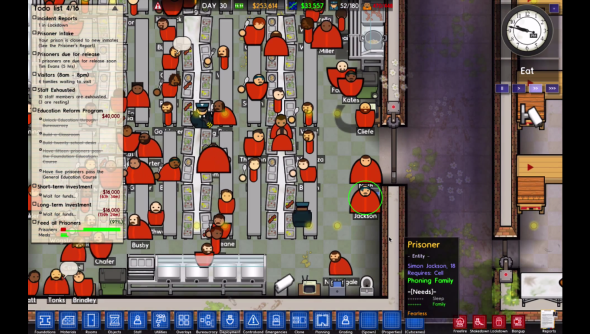 Update 26 did nothing but cause trouble. With Update 27, Introversion think they’ve fixed it.

Food doesn’t become a problem till you’re trying to feed hundreds of prisoners. In small scale prisons you need only on kitchen and one canteen. It’s clear to the AI chefs where they go to cook food and where they put the food once its ready.

In a large prison you can’t get away with only one canteen. You need multiple kitchens, multiple canteens, squads of chefs, a feeding schedule for prisoners to know when and where they must go to eat. The AI gets confused, doesn’t know where to take it, and everyone gets unhappy. In Prison Architect, when the AI gets unhappy it starts a riot.

Prison Architects food problems have been around for awhile but in last month’s update Introversion said they’d fixed it. Instead of chefs needing to knowing where to put food they just made it and stored it. Food left the kitchen and arrived in the canteen by teleporting when a prisoner requested it. It solved the problem for everyone in the prison.

Then players found a way to exploit it.

Kitchens are dangerous places in Prison Architect, they’re full of sharp implements which can be used to hurt people and they’re usually near the canteens which are where riots tend to start. As such chefs are an expensive commodity and frequently need replacing.

Players found they could make a kitchen offsite in a safe place and have a team of chefs cooking food that was then teleported all over the prison, never putting them at risk.

Update 27 is here to solve the problem and plug the exploit.

The new logistics system automatically maps which canteen prisoners will use based on their security clearance and their schedule. This means chefs now know how many people are going to be going to a canteen, when, and how much the need to cook. You can still have too few chefs and too small kitchens, meaning there isn’t enough food prepared, but they will never cook too much food.

Introversion’s Chris Delay and Mark Morris go into greater detail in this video:

That’s not all that’s changed in update 27. You can now wiretap the communal phones to track down if a prisoner has contraband and report prisoners who have offensive bios.

The full change log’s pasted into the next page.

= Other changes and fixes