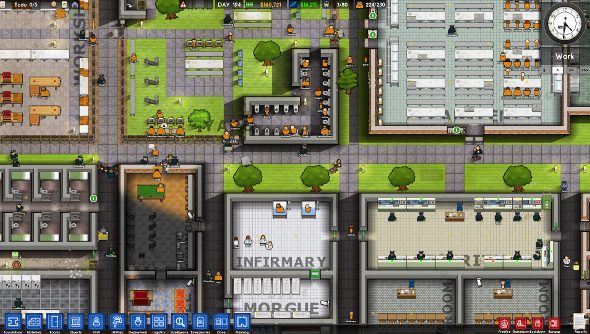 We hate goodbyes at PCGamesN. That’s the reason half the team are still here – they were actually fired way back, but no-one’s had the nerve to tell them. It’s also the very reason watching the last ever YouTube update from Mark Morris and Chris Delay – producer and director of Prison Architect respectively – has been so difficult. We just don’t want it to end.

Cast your eyes over the best strategy games on PC here.

Nevertheless, end it must, and as both Morris and Delay indicate, this is the last video either will be putting together on Prison Architect. As such, the video focuses on new features rolling out with Prison Architect version 2.0, which is available now.

It’s a scary time for the pair, with Delay noting that “Usain Bolt has won six gold medals in the time it took us to do Prison Architect…I don’t quite know what we’re going to do with ourselves”. Indeed, he goes on to confirm that the mysterious Scanner Sombre will be the next project the two will be working on. “I think we should just confirm it,” adds Morris. “This is the last time these people are going to hear from us for a while.”

Introversion detailed improvements to the game in version 2.0 back in July, with this latest video instead narrowing down its focus to a few key features, such as the new ‘developers tools and cheats’ mode, which is claimed is for experts only.

It’s a controversial addition, it’s suggested, given there’s a risk people won’t want to play the game and will just cheat their way to success instead. Also, Delay claims that, while Prison Architect 2.0 is finished and (largely) bug free, the two take no responsibility for any mishaps that may happen should you turn the cheat mode on.

Either way, it enables all sorts of cool additions, like the ability to build your prison instantly and spawn any object in the game anywhere and at any time. “This is not intended to be a game mode,” adds Delay, claiming it’s more like a map editor. “You can always pause the game while you do this stuff. It probably won’t crash, but sh*t may go wrong.”

“That’s the last feature we have planned for Prison Architect,” concludes Morris. “There’s a little lump in my throat, I’m struggling a bit. When we say it’s the end of Prison Architect, it’s the end of the planned PC updates. That’s not to say we’ll never return to Prison Architect, we may very well do so, and of course there are a couple of other platforms we’re working on. Everybody rest assured, we going to be fixing the bugs. What we’re not doing is taking a big step away and saying ‘well, boll*cks to you’.”

The two have also confirmed they’ve signed a deal with a publiser to work on a tablet version, but they can’t yet reveal just who that publisher is. Interestingly, the video itself ends with clips that showcase the progression of the game’s development from 2010 onwards. Aww. It’s all very sweet.

You can check out the video below, or have a look at a rundown of the new features and download version 2.0 over on Introversion’s website.