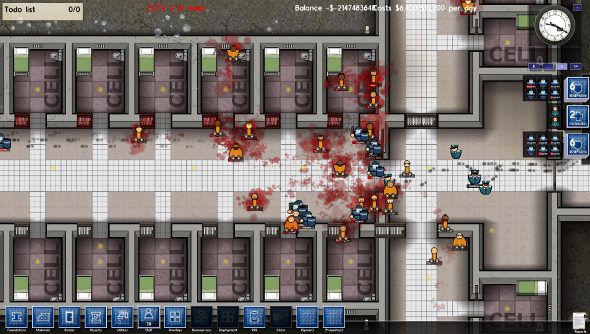 Incarceration simulator Prison Architect has received a new update, alpha 23 – that’s rather a lot of updates – and it brings with it some nifty new features along with some complicated ones involving things that I was probably taught in school but ignored because I was doodling willies on my jotter.

The four big additions that alpha 23 chucks into prison are: remote access systems, an overhaul to CCTV, logic circuits, and a continuation of the contraband smuggling feature. Lamentably, there’s no mention of putting things up bums, which is obviously the best part of smuggling.

The remote access systems are a pretty serious feature of a modern prison, as they allow for the automation of doors. Interconnected systems and servos can be set up to open doors at certain times of the day, and the bumbling guards can now control doors from the comfort of their cozy security room.

CCTV has been overhauled and monitors and cameras must now be linked up using the connection mechanics developer for the remote access systems. One guard can use one monitor linked to as many CCTV cameras as you like, but since there are only 8 screens, it’ll cycle through them, only offering partial coverage. So some naughty business might be missed.

And there’s something about logic circuits, but honestly it’s all Greek to me. Well, it would be if I didn’t know any Greek.

Finally, contraband smuggling! Goodies can get into the prison through materials coming from the delivery truck. Dogs, guards and metal detectors will all need to be employed to ensure that nothing gets into the prison that isn’t meant to. Contraband can simply be flung over walls, too. This requires a prisoner to arrange a time and a place when they are on the phone or getting a visitor. If guards are in the vicinity, however, no items will be flung.

Better get your guards glued to those CCTV monitors then.