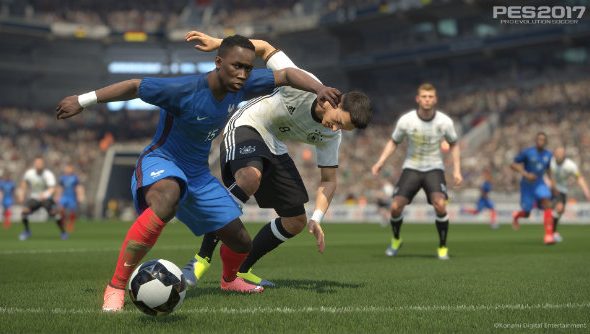 Some exciting news has been released for the next iteration in Konami’s football (or soccer) series, PES. According to the developers, it will completely change the way individual players foot the bal. Some might foot it gently, some might foot it hard, some will perhaps foot it with a little pirouette and some stylistic flair. My speciality would be to foot the ball while staring intently into the camera like that guy up there.

See what else the future holds in our list of upcoming PC games.

This varied ball-footing is all thanks to an overhauled ‘Real Touch’ system, which now sees different players react to the ball in their own special way, based on player positioning and ball trajectory.

That overhauled system will combine with realistic ball physics to change up the passing game, according to Konami, with timing playing a crucial part in attaining the perfect pass.

As well as this, we’re promised the usual visual improvements, with the studio’s Fox Engine being leveraged even more than last time – player models, lighting, crowds, pitch and stadiums have been completely revamped.

There are also a bunch of new animations for all players, with a focus on improving goalkeepers. These ball blockers are promised to be the most agile in the series’ history.

We’re also promised adaptive AI, with computer-controlled opponents learning from how you play, forcing you to mix things up.

PES 2017 will be officially unveiled at this year’s PES League Final, which takes place alongside the UEFA Champions League Final in Milan this weekend.