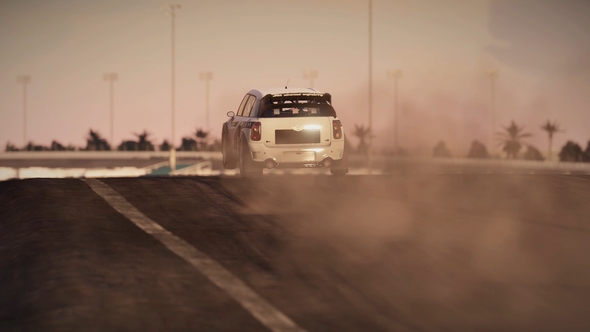 Loose surface racing was the most loudly and frequently voiced request from Project CARS players when talk turned to a potential sequel. There was little to fault about its road racing chops, after all: value judgements in comparison to its only real rival, Assetto Corsa, come down to personal preference. They’re both magnificently convincing simulations of tyre on tarmac.

But as many sub-standard WRC titles have demonstrated, loose surface racing is actually a hard thing to simulate. It’s so far out of the realm of the everyday driving experience that the developer’s job becomes about delivering what you might imagine a car to do at 80mph on gravel, rather than what you know to be true from your school run in the Touareg.

Codemasters set a new high tide mark with Dirt Rally in 2015, but for them the proposition was simpler than it is for Slightly Mad Studios; they had rally game pedigree, an early access release model to iron out the kinks, and they weren’t also trying to capture road racing within the same engine. If you’ve ever wondered why the Project CARS Studio goes by that name, now you know.

To get the feeling of rallycross right, SMS went to the horse’s mouth. Team OMSE boast titles in every one of the sport’s US championships, and 19 X Games medals. Their Honda Factory Global Rallycross Civic Coupé is the vehicle I first experienced Project CARS 2 from within, and the physics model underpinning it was created under advisement from rallycross drivers Mitchell deJong and Oliver Eriksson. 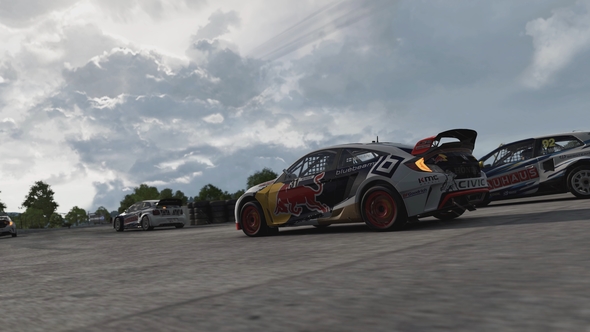 It’s a 600bhp box of violence on four wheels, and the preview build I played demonstrated that aptly. As with Dirt Rally, attention must be paid to where the car’s balance lies at all times, because asking unloaded tyres and suspension forks to turn sharply won’t make for a new lap record, nor will flinging all the weight onto one side and hoping the resulting drift will guide you through the arc of the corner by sheer chance without making corrections. A lot of games try for this sensation, of course; very few manage to convey it in a way that feels manageable and satisfying.

My personal experiences tearing around two mixed surface rallycross tracks in said Civic leads me to believe it probably does a very good job of this. Probably.

I’m reserving judgement slightly because the rallycross events on the build I played had frame rate issues that really affected the sensation of the game’s handling. The resultant delay between my inputs and my car’s behaviour made the driving particularly difficult. I’m talking about a preview build at a press event, so what I’m not saying is that the final game will have frame rate issues – just that some combination of PC, build, and screen (a TV outputting at what looked like 4K) made for a tricky drive.

What I can say is that the visual fidelity’s taken a step up. Creative director Andy Tudor wanted granular detail for Project CARS 2, in a literal sense – the team paid attention to how long dust takes to fall. As a result the car interiors and exterior models – which were never lacking in the first place – are placed on tracks that feel a bit more matched in detail, contrasting the first game’s slightly flat and dated locales. 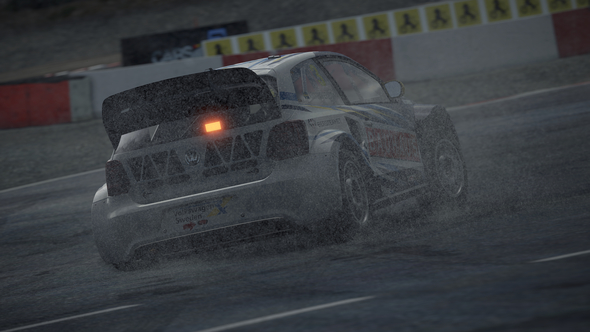 I can also vouch for the tarmac racing. I can do that. A few laps in an Indy car around Daytona and a race at Austria’s Red Bull Ring in an Acura NSX GT3 at 60 fps (road events seemed unaffected by any fps blight) will do that. Open-wheeler racing felt sufficiently dangerous in the first game, but it’s now bolstered by a real sensation of downforce. Specifically: when the car has downforce, and when it doesn’t.

For example, if you lose too much speed curving around a low-speed corner you’ll feel understeer kick in because the air flowing over your wings isn’t moving quickly enough to push your car down. Similarly, fantastic sound design makes you feel glued to the track at high-speed straights – you can hear the plank rattling against the floor. SMS’s subtle cockpit camerawork, a strength of theirs since Need For Speed: Shift, really helps sell the idea that you’re accelerating and decelerating at tremendous speed, with greater effect than in the first game. Cover up the wheels, put a windshield in front of you, and the principles are the same, as I found in the NSX. 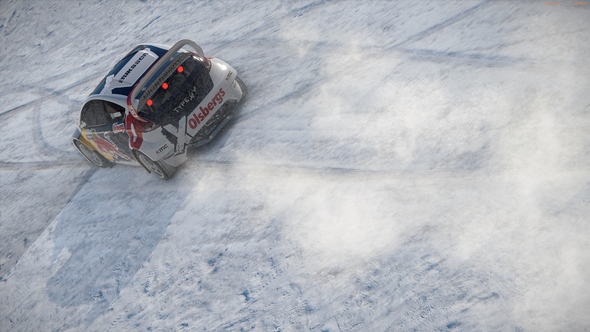 Keeping speed through corners makes the car easier to drive. Leaning it on one side and then asking it to accelerate at full speed will initiate a spin. Hacking at the steering wheel at low speeds will ruin traction. We’ve been working with these principles in driving games for decades now, but the sense of progress in Project CARS comes from how well they’re all articulated.

I’m speculating here because I didn’t have chance to look at the AI race settings, but my guess is they’ve become more conservative. Where a rival driver would have run you off the road in defiance of your overtaking attempt in Project CARS 1, here they’ll cede the position sensibly and slot in behind you. I even noticed cars ‘turtling’ a bit in low-speed corners as I passed them, slowing down more than necessary to avoid contact and let me through. Perhaps there’s an aggression slider.

If there is, it’s turned all the way up in rallycross. Opponents will sideswipe you and launch into you at every opportunity, which is perhaps down to the conventions of the sport relative to polite endurance series racing, and perhaps a function of all that dirt and gravel. In any case, it helps to convey that this is a very different discipline, and that in turn adds value to its inclusion here in Project CARS 2.