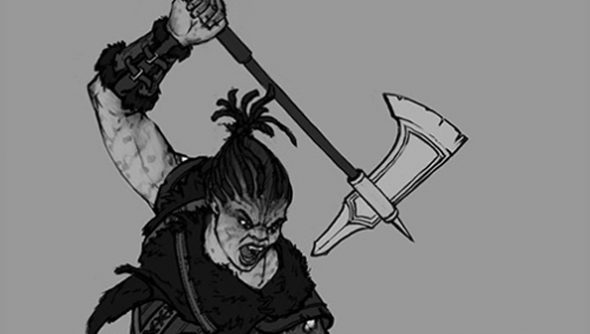 When Obsidian say they’ve been building ‘test worlds’, I’m immediately put in mind of the old Origin Systems motto, “We Create Worlds”. I don’t think that’s too far off the mark, either. Starting with nothing and working with unfamiliar software, Obsidian have made ‘gray boxes’ – test characters and environments from a new universe, moulded from digital putty for our delectation.

Eternity’s art team have recently moved programs from Softimage to Maya, and the results are already impressively detailed. Here’s art director Rob Nesler on the subject: The medicine ball flail below requires some explanation. It was created by lead animator Mark Bremerkemp to test Eternity’s physics, says Nesler, so don’t expect phallic symbols to become a thematic cornerstone in the released game: And this is concept art from Polina Hristova, whose work we first saw while the Kickstarter campaign was ongoing: Finally we have a sniff of what dungeons might wind up looking like, courtesy of environment artist Sean Dunny: All in all, it looks like we’re in for the contemporary Infinity Engine RPG we were promised. I can scarcely wait. What do you think?