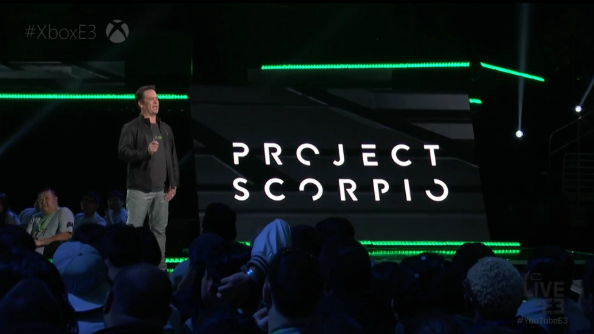 We learned this morning that Microsoft are releasing their next console – currently codenamed Project Scorpio but surely to released under the Xbox banner – in ‘Holiday 2017’.

For everything else E3-related, head to our homepage – it’s got all the PC gaming news you could ever want.

Microsoft’s Head of Xbox Phil Spencer made the announcement on stage at the pre-E3 Xbox briefing, and was keen to focus on the high-end specs that the machine would be packing – including an eight-core CPU, 320GB/s of memory bandwidth, and a graphics card with six teraFLOPS of performance. It’ll be a console that can run 4K games at 60Hz, as well as “high-end VR games”.

Which is mighty impressive in console terms, but not necessarily so if you compare it to top-spec PCs of today – and especially not those that will be kicking around 18 months from now. (Although it remains to be seen if 6 TFLOPS will go further on a closed platform such as a new Xbox, and it’s entirely possible that it will.)

But while Microsoft are seeking to close the gap between console and PC gaming (as evidenced by their new cross-platform Play Anywhere initiative), games that release for both Scorpio and PC won’tbe held back by the hardware of the console.

“With our Universal Windows Platform, making sure developers have the capability to go to 6K, go to 8K – whatever they want to do with our platform – is critical,” Spencer told us in an interview earlier today.

“We’ve seen this in the PC space. Every game that comes out has a recommended spec, and developers will decide how much beyond the recommended spec they want to push. If there’s a large install base of people who buy at certain price points and certain capabilities I think that’s a good thing.”

“Us creating a console price point that can support 4K with six teraFLOPS, which I think is what you need to do ‘real’ 4K gaming, is going to make it a little easier for all developers out there. Just like we have in [graphics] cards, there are certain cards that have a spec that get real market share, then when you’re going to create your recommended spec or your min spec you’re going to look at where all these things cross, and I think Scorpio will help create a good 4K spec. A lot of people on the PC side will go beyond what Scorpio has.”