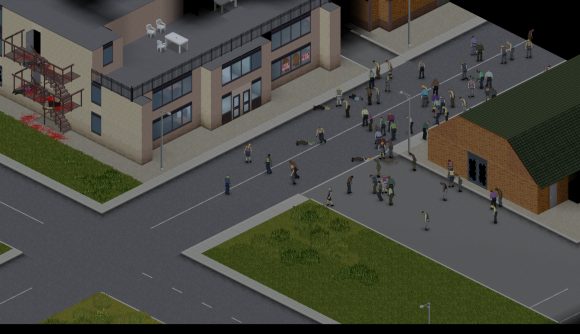 Project Zomboid is secretly one of the best zombie games ever made, and it’s been in Early Access since 2013. That doesn’t mean it’s lacked attention: developer The Indie Stone has continuously put out updates that have filled out the game immensely over the years. Today, however, the small studio announced a particularly big one: the latest test build includes Project Zomboid’s long-awaited multiplayer servers.

The mode is currently available only in a test branch – The Indie Stone says it still needs a lot of polish, and it’s been an incredibly complex project for such a small team to undertake. However, the studio says wider player testing will help tighten up the latest version of the game, and it’s invited everyone to give the new build a try.

Multiplayer Zomboid supports up to 16 players, dedicated servers, and co-op play. The new build also includes a huge update to the map, which originally was set in and around Westpoint and Valley Station, Kentucky, but now includes parts of Louisville to the north. The developers describe the new map as “like silly huge”, which will help support the additional players.

The Indie Stone cautions players against using public servers for this iteration of multiplayer, and they say that anyone who feels they might “write us stern letters about this beyond a friendly bug report” might want to wait until the next ‘IWBUMS’ update – that’s Zomboid shorthand for ‘I will back up my save.’

Going forward, the devs say they’re aiming to support more than 32 players in future builds, and they urge everyone who wants to try the new build out to read this blog post to get a feel for what they’re about to jump into.

If you’ve never tried Project Zomboid, it’s a fascinatingly detailed and stark simulation of surviving a zombie apocalypse, and you’ll have to forage for and grow food, put up curtains in houses you stay in to hide the light, repair cars, build forts, and try to avoid the terrifying hordes of undead that gradually form in the tiny towns you’re exploring.

The Indie Stone has encouraged players to donate to help Kentuckians recently struck by a devastating tornado outbreak:

Just as we were celebrating an update to our Kentucky-based game, we were saddened to learn that the real KY has been devastated by the deadliest tornadoes in its history.

We've donated to help Kentuckians, and encourage anyone who can to do the same: https://t.co/TlbOS2NUer

To access the test build, right-click Project Zomboid in your Steam Library, click the Betas tab, and select b41multiplayer from the drop-down menu.