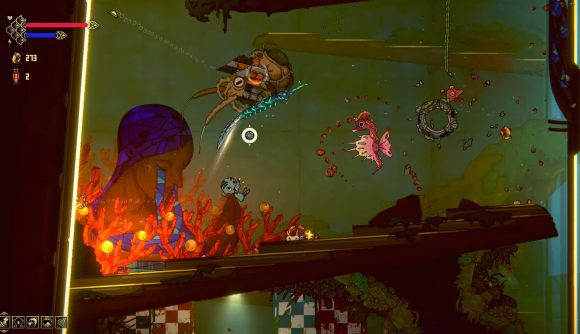 Pronty: Fishy Adventure launched on Steam this week. It’s Metroidvania set underwater, which thanks to Aquaria will be a pretty familiar concept to connoisseurs of indie games. But Pronty’s standout feature is its weapon, a sort of cyborg swordfish that has a mind of its own, and it gives the game’s combat a very fun hook.

You play as Pronty, a little anthropomorphic fishy assigned as a defender of a fallen undersea city. The creatures around that city have mutated due to pollution, and – this being a Metroidvania – you’ll have to explore the surrounding waters, fighting monsters and solving puzzles to unlock new abilities that will open access to new areas.

Your javelin attacks wherever you click, and you can mash your mouse button to lay out attacks on the enemies. But Pronty moves slowly while directing the javelin, and you still have to dodge attacks – so basically, you’re controlling two characters at once. Eventually you’ll get abilities like a dash that marks enemies for extra damage from the javelin’s attacks, forcing you to control yourself and your weapon in ever-tighter concert.

The opening hour or so of Pronty is pretty slow, with a load of exposition and dialogue to run through, but the strength of the combat has me interested to see where it goes. There’s a free demo on Steam.

Pronty is also scheduled to come to Switch and Xbox in the first quarter of 2022, though it’s tough to imagine how those mouse-driven controls are going to work on a gamepad.