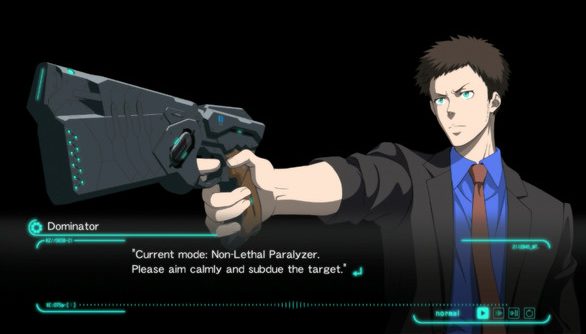 Some anime just screams out for the videogame treatment, doesn’t it? Psycho Pass does, stuffed full with moral dilemmas, drama, and action sequences. Its world is the perfect fit for an open-world crime romp, too, but that’s not what we’re getting – instead a visual novel just launched. To be honest, that’s as good a fit as any.

Check our list of upcoming PC games for future hits.

I mean, visual novels are at least perfect for those moral dilemmas, right? Psycho Pass is practically peppered with them, right up to the final twist.

This is a world where a person’s traits are analysed and weaponised against you by the law. It’s Minority Report for Otaku, where people can be taken out by the authorities for becoming too emotional. It doesn’t shy away from the violence, either.

These strange laws are overseen by Enforcers, who are usually criminals themselves. This is why they’re so comfortable with killing – Psycho Pass’s government uses the killers to kill the killers, but these are kept on a very tight rope. If they cross the line, they’ll be on the end of another Enforcer’s bullet.