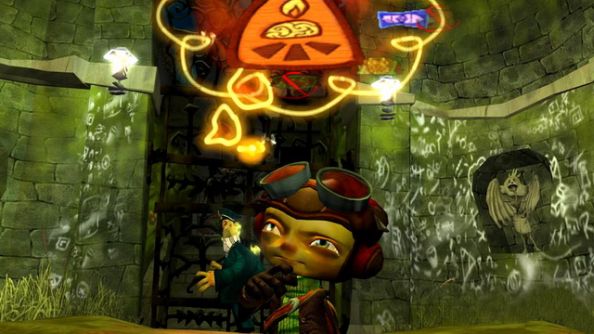 Psychonauts 2 seemed an impossibility when, after a promising Twitter overture, it turned out that even Notch couldn’t stretch to funding it. But Double Fine have settled on a piecemeal solution: the decade-awaited weird-platforming sequel will pull together over $10m from the studio’s own reserves, an unnamed partner, and crowdfunding.

They hope to make up the latter via a $3.3m campaign on Fig.co, and it’s very nearly there already.

Fancy a spot of oddball? There’s lots of that among the best indie games on PC.

Fig, which has an advisory board featuring Schafer, Brian Fargo and Obsidian’s Feargus Urquhart, functions almost identically to Kickstarter – only there’s the option of actual investment, and the prospect of actual money back if the game in question’s a success.

Double Fine have a patchy record in crowdfunding and Early Access, but the Psychonauts 2 team is assembled from the sort of wonderfully inventive personalities the studio seems to attract: artists Scott Campbell, Peter Chan and Nathan Stapley, all familiar to those who’ve watched the Double Fine Adventure documentary, as well as Valve legend and Psychonauts co-writer Erik Wolpaw.

Schafer will lead design, obvs. Are you fond of his first foray into 3D platforming?