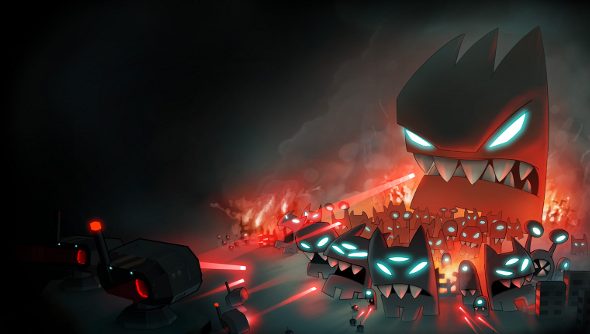 Times have been tough over at Puppygames, leading to the developer switching from development of free-to-play Battledroid to an arcade roguelike called Basingstoke. The developer has four months of money left, but Battledroid still had a year of development ahead of it.

Perhaps that was the impetus for co-founder Caspian Prince’s blog post, today, where he laments the supposed de-valuation of games. “You are worthless to us,” he says in regards to customers. Specifically, he means that a sale has become so insignificant, netting the developer so little, that it barely has any value.

“Once upon a time, back in the early 2000s or so, games would sell for about $20 or so,” Prince said. “Some developers did really well at that price point – I mean really well. Most of us didn’t do that well, and made beer money, but we carried on making games anyway because that’s what we liked to do, even if nobody wanted them.“

But when Steam arrived, and then things like Humble Bundle, it was “cataclysmically disruptive”.

“The upshot of it is, within 5 short years, the value of an independent game plummeted from about $20 to approximately $1, with very few exceptions,” Prince continued. “Steam is great! You can sell loads of games! But only if they’re less than $10. Technically Valve don’t actually dictate the prices we charge. Actually, they do. Utterly. It’s just not talked about. In fact technically, I don’t think anyone’s allowed to talk about it.”

Prices aren’t the only place where he thinks that devs are at Valve’s mercy either. “That’s how much we sell our games for. One dollar. They’re meant to be $10, but nobody buys them at $10. They buy them when a 90% discount coupon lands in their Steam inventory. We survive only by the grace of 90% coupon drops, which are of course entirely under Valve’s control. It doesn’t matter how much marketing we do now, because Valve control our drip feed.”

So a dollar, then, which isn’t quite worthless. Maybe even more if the customer buys all of Puppygames’ titles, so possibly even $5. But that isn’t going into the developer’s pocket, of course. “After Valve and the tax man and the bank take their cuts, you’re not even worth half a cup of coffee,” Prince said.

Yet, customers still mean the world.

“Without customers, we’re dead in the water, homeless and living in a cardboard box outside Berko sewage plant,” said Prince. “But individually, you’re like ants. And all of developers secretly know it and don’t talk about it. You’re not worth supporting. It’s far, far better to completely, totally ignore support, if you want to make a living. Developers don’t like to talk about it, and they certainly don’t want to make customers aware of it.”

Appropriately gloomy stuff for a Monday.