This week saw the launch of Supergiant Games’ latest work of art, Pyre. Just like the studio’s previous works, Bastion and Transistor, it’s a breathtakingly beautiful triumph of art and musical design. Less obvious, however, is what exactly Pyre is. Despite their differences, Bastion and Transistor are united for the fact that both are isometric action games. But take a look at one of Pyre’s trailers and you’d be hard pushed to tell what’s going on. Having played a few hours now, I can tell you exactly what it is.

Pyre is destined to go down as one of the best indie games on PC.

Pyre follows a group of ragtag adventurers that have been exiled to a dangerous and desolate land. Exiles have a chance of redemption, though, and may be permitted access to the Commonwealth once more by performing the Rites – a kind of magical ritual that basically requires placing a magical orb into a pillar of fire. Preventing this from being so simple are the rival bands of exiles that are also looking to cleanse their souls. This causes each Rite to play out like a sports game: one ball, two pyres, and two groups of exiles attempting to hurl the orb into the opposing team’s flames. 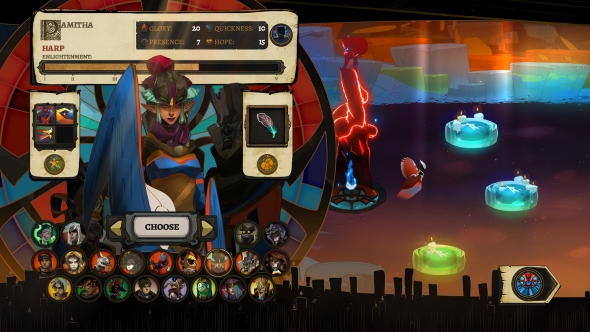 The initial concept sounds a touch like football, but it’s actually more like Harry Potter’s sport of choice. Well, at least quidditch if the rules allowed you to take your wand onto the pitch and throw curses at your opponents. See, each of Pyre’s exiles can throw out a stunning aura that will obliterate an enemy player from the game for a few seconds. Depending on the character you control, this may be a slow-moving, wide wall of energy, or a narrow, rapid blast. There’s even a little imp that can self-sacrifice himself, detonating like a grenade.

If the enemy is in possession of the ball, these spells will evaporate them and cause the ball to bounce away – this is your chance to seize it back. Rites are a 3v3 affair, and you choose which of your exiles head into battle. A personal favourite is Rukey, a Cur (see: talking dog) proudly wearing a Poirot-like moustache. He’s small and nimble, and this makes him a great chaser, to borrow a quidditch term. With the orb in paws, he can quickly dash between enemy exiles and toss it into their pyre. Provided, of course, he can get past the keeper.

Pyre doesn’t assign exiles specific roles but there are clearly characters suited for specific positions. Jodariel, for instance, is a massive bull-horned lady demon. She’s slow, but when jumping she lands with a colossal crash that knocks back enemies. She’s also surrounded by a pool of energy whenever she’s not holding the orb. Every participant of the Rite has one of these pools but Jodariel’s is notably large. Accidentally running into this pool – easily done, given the rapid pace of play – will also evaporate you, removing that exile from play for a few seconds. While the downtime is low, you can imagine how vulnerable your pyre becomes if all three of your exiles are off the field for even three seconds. 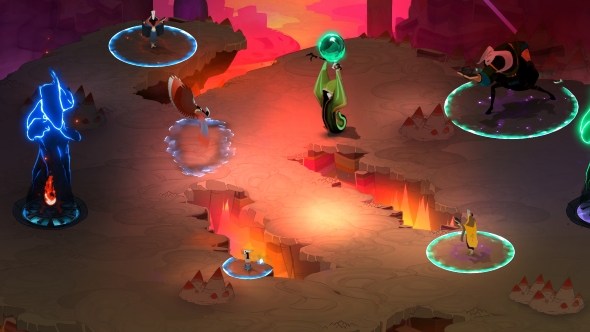 Her wide energy pool makes Jodariel ideal as a keeper, and if the enemy is closely guarding their own pyre it can seem impossible to get by without being turned into green mist. That’s where jumps come in handy. Everyone has their own variant; Rukey can even be upgraded to do a sweet little double jump. This lets you leap over that dangerous aura and slam dunk the orb into the enemy flames.

A typical pyre has 100 health, though, and a small doggo like Rukey will only do a tiny bit of damage to it. Jodariel, however, with her giant heft, can basically piledrive the orb into the ground and wipe out a third of the pyre’s health. That’s all very well, but how do you get her across the pitch? This is where all of Pyre’s systems start to interact. You can pass the ball between players with a simple tap of the space bar, and so positioning becomes incredibly important. As these systems become more obvious to you, so do the tactics you can use. Why not try sending Jodariel close to the enemy pyre while Rukey runs around with the ball to confuse the opposition? Your third character can leap from cover to cover, firing spells, and attempting to remove the enemy from play. With the path clear, Rukey can throw the orb halfway across the pitch to Jodariel, allowing her score into the now unguarded flames.

There’s much more to Pyre than the Rites; it’s a Banner Saga-like RPG, too, with wonderful characters, astonishing music, and a truly affecting storyline. But these strange, magical rugby matches form the beating heart of the game, and it’s as spellbinding as it should be. You can even play it without the narrative surroundings as a straight-up versus mode, either against a local player or AI teams. On this evidence, I can see myself returning to Pyre for Rites matches long after I’ve watched the game’s closing credits.