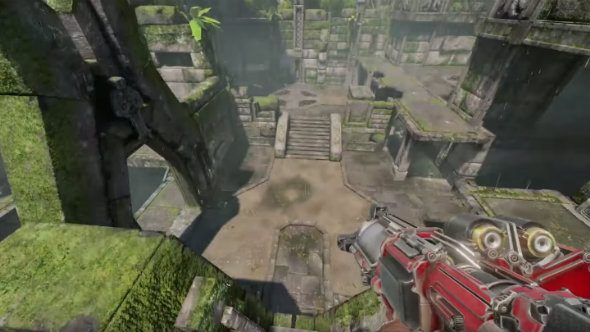 A Quake Champions trailer has just come out of QuakeCon and you can watch its arena-style, old school shooting in action above.

Will it be good enough to join our list of the best first-person shooters?

The trailer has everything you would expect from Quake: rockets, rocket jumps, gibs galore, speed, rail guns, bounce pads and tight arenas of death.

I asked resident shooter man Ben “Shoot The Mens” Barrett what he thought about the trailer and he said, “I hate the railgun model, but the jumping is nice.” So there you have it.

Quake is going back to basics, delivering arena combat with no loadouts and no limit to what guns you can carry. It’s all about fast, precise shooting and slick movement while carrying around piles of guns.

Quake Champions will be going into closed beta in 2017, so you’ll be able to try it out at 120hz some time next year.