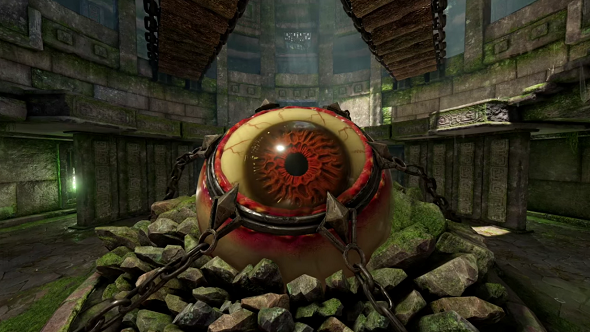 It’s time for another Quake Champions trailer, in which someone moves through a tight arena, slotting people as they go, never standing still. Obviously.

If you’re into retro thrills, check out our list of the best old games.

The new trailer shows off a fresh map, The Ruins of Sarnath; a multi-layered arena with a massive, living eyeball at its center.

It’s the temple of an Elder God called Cthalha, which sounds a bit like Cthulhu’s less-famous brother or something. Either way, the eldritch being saw fit to install jump pads, ledges, and, most importantly, boomsticks, all over its ethereal abode.

“From the Heavy Armor in the Sluiceway to the Rail Gun lurking in the Cistern and the unmistakable Eye of Cthalha, keeping an ever-present watch on Quad Damage and Protection Power-Ups, players will find an Arena purpose-built for competition and loaded with gibs,” according to the official blurb.

There’s no release date for Quake Champions just yet, but it’s probably coming this year.