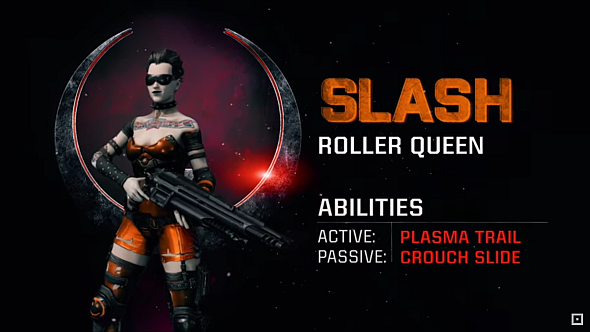 Bethesda have unveiled the latest addition to Quake Champions’ roster: Slash, the Roller Queen, who returns not from Guns ‘n’ Roses but from Quake III: Arena.

But who is she joining? Here are all the confirmed and rumoured Quake Champions so far.

Slash the Roller Queen returns from Quake III: Arena. She’s a young punk from the streets of Los Angeles who became a test bed for the latest cybernetic implants, a concept now fully realised with her abilities in Quake Champions. She can leave a deadly trail of plasma behind her as she moves, like a deadlier, faster slug, and can move at full speed and enjoy a faster turning circle while crouched.

Here’s the rundown on her stats and abilities:

Active ability – plasma trail: activating this ability will cause Slash to leave a bright trail of destruction in her wake, inflicting damage on enemies careless enough to pass through it. Hitting the ability button again will detonate the trail for massive damage. You can use this to cut off key paths, or encircle enemies or power-ups.

Passive ability – crouch slide: Slash is already very mobile, but by crouching while running, she’ll use her skates to go into crouch slide, allowing her to move full speed while crouching and to whip around corners smoother and faster than other champions.

You can check out her reveal trailer above, but Bethesda have also recently released some new gameplay of Quake Champions, so you can see how it plays outside of promotional material.

Still no word on a release date for the latest Quake, but you can still sign up for the closed beta over on the website. Good luck and happy fragging!