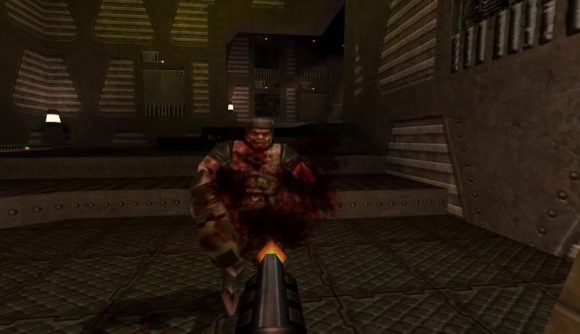 An arcade port of Quake has become playable after over 20 years. The piece of FPS game history was previously held by copy-protection that’s been broken, making it accessible to the masses for the first time.

As highlighted by Twitter user Sinoc (cheers, PCGamer), this version of Quake was designed in 1998, but discontinued after only a small amount of machines were made, making it incredibly rare. Some byzantine DRM meant MAME couldn’t run it – until now. According to this blog, the eponymous Quake – Arcade Tournament Edition was an attempt at converting the PC experience to arcades. The display was a 27″ 640×480 VGA screen, and controls used a trackball for the mouse, and seven buttons that were split between movement, shooting, and other actions.

The cabinet was really a repackaged PC, a combo of 266 MHz Pentium II and Windows 95. Perfect for online preservation, except for one problem: a dongle was required to be plugged-in to run it. For over two decades, this hurdle kept this version of Quake from being played by more than the lucky collectors who managed to get one of the actual machines. Github user mills5 has now circumvented the tech, and you download it all here.

Don’t expect anything revelatory here – it’s really just Quake again, as you can see with the video below. But it’s a part of the legacy of a series that’s influenced so many multiplayer games, and horror games, and it’s nice to have a more complete picture of this era of gaming.

If you want more classic Quake, you can get the first three free right now, for a limited time.