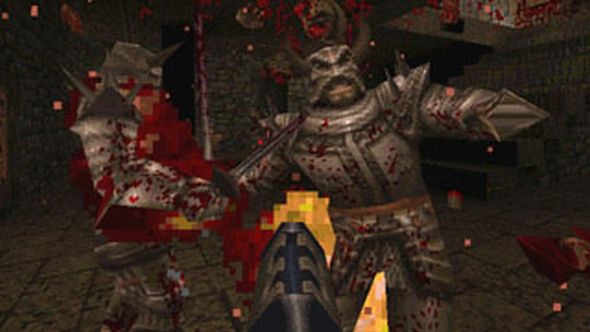 Some of the competitors have had a hand in the best FPS games on PC.

Willits denied the Internet’s dream of a Battleborn vs Overwatch final by knocking out Overwatch director Jeff Kaplan in the semis, while Pitchford, executive producer of supposed rival Battleborn, was busy beating Sean Dunn of Sparkypants Studios.Here’s how the tournament shook out.

Congratulations to Willits, who joined Quake developers id Software in 1995 after falling in love with Doom. He worked as a designer on the original Quake and many of its sequels before leading design on Doom III. He is currently working on Quake Champions.

If you’d like to watch the action, IGN have a video of the second day of the DICE summit. Tournament coverage comes in periods throughout the video, but the final kicks off right at the end. After some endearingly tepid trash talk, the match itself starts at 6:56:55.

Update February 23, 2017:The first round of the DICE 2017 developer Quake tournament has concluded, with FPS devs coming out on top.

The most exciting eSports tournament of the year (not really) continues at DICE today after the first round saw eight developers fall to their rocket-jumping foes. It will conclude today.

Among the victors were Overwatch’s Jeff Kaplan, Battleborn’s Randy Pitchford and id’s own Tim Willits. The biggest rivalry in videogames, Kaplan vs. Pitchford, can only happen in the Grand Finals, and will involve Kaplan getting past Willits and Pitchford beating the best of Feargus Urquhart or Sean Dunn, as well as his own quarter-final opponent Claudio Tapia.

Full brackets are available over on the FaceIt website, along with times for today’s matches – it all starts at 11am PST, 7pm GMT, with finals at 3-4pm/1-2am. Archives are on the IGN livestream from last night, embedded below.

Jeff Kaplan’s game is at this timestampbut no, he doesn’t talk about spider-tanks, african AI scientists or anything beginning with E.

Original story February 20, 2017:I can’t be the only person to have occasionally wondered how good the people who make my favourite games are at playing them. Well, come Thursday, we’ll have learned who is the best of a certain group of industry Big Names, who count developers from Blizzard, Gearbox, id Software, Wargaming and Obsidian among their number.

At DICE 2017, London-based eSports organisers FaceIt are hosting their second annual QuakeWorld tournament. Assuming they get drawn together, Battleborn’s Randy Pitchford could finally have his chance to do what he’s probably wanted since May last year and kill Overwatch’s Jeff Kaplan – even if only in Quake.

Each will compete in a series of 1v1 tournament matches in QuakeWorld, an update to id Software’s seminal 1996 shooter, Quake. QuakeWorld enhanced Quake’s multiplayer features, enabling it to take advantage of the first decent internet connections and positioning it as perhaps the first truly online shooter.

The tournament will kick off on DICE’s main stage with the opening rounds on Wednesday, February 22. A winner will be crowned on Thursday, with the semis and final scheduled to take place from 3pm Pacific (11pm UK time). You can watch the livestream on FaceIt’s Twitch channel here.