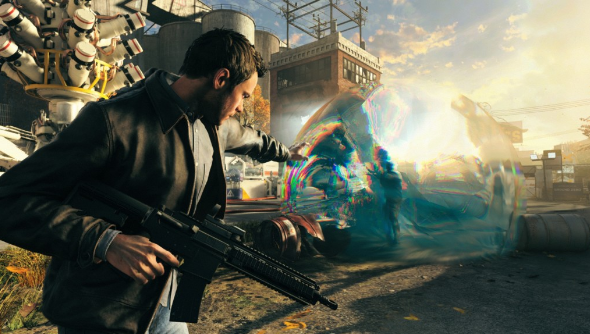 Microsoft have shown off some fresh new gameplay from Quantum Break at Gamescom. The Remedy-developed game combines some exceptionally slick third-person shooting with a time freeze mechanic. It looks bloody brilliant.

The demo starts with quite an explosive shootout as the player character ducks and dives around place, freezing time and being able to take out heavily armoured chaps whilst they’re unable to move. A second stage shown later revealed a slower-paced, more narrative heavy section. It certainly feels like the product of the developer that worked on Max Payne and Alan Wake; both wonderfully John Woo-cool and graphically beautiful.

The game is made up of two sections – a game and a live-action show. “Our goal is to combine a heart pounding action game with a live action in-game show,” said Sam Lake, Remedy’s leading man. The game primarily shows the story of the heroes, with the show focusing on the villains. Stars of both sections include Aiden Gillen (The Wire, Game of Thrones), Dominic Monaghan (Lord of the Rings, Lost), Shawn Ashmore (X-Men), and Lance Reddick (The Wire, Fringe).

Quantum Break is so far only confirmed for Xbox One next April, but like Max Payne and Alan Wake, will hopefully make it to the PC.