There’s a very odd relationship between the PC and Microsoft’s various Xbox One exclusives, Quantum Break included. Not only does the architecture of the machine make porting a simpler task than in the past, but Microsoft’s effective ownership of our platform makes it far more viable a business move than it is for Sony. However, they keep it very much to themselves, speaking in vagaries and maybes to avoid committing to anything, while Playstation’s lot are open about games like Street Fighter V making it over. Now it looks like the Brazilian Ratings Board has jumped Microsoft’s gun and confirmed Quantum Break PC as a real thing.

Might this sneak into your personal picks for the best upcoming PC games?

It wouldn’t be the first time the South American regulatory body has caused games to be announced early. You can see the entry for the game here, clearly showing two ratings, one for the Xbox version and another for an as-yet unannounced PC edition. Here’s a screengrab, just in case: 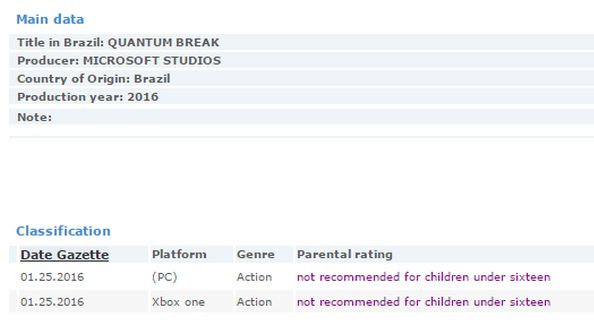 There are plenty of possible explanations, from errors on the part of the ratings board, to a problem in their system, to an originally planned PC version having been cancelled in development. However, Phil Spencer went on-record as saying they’d like to bring a lot of these Microsoft exclusives to PCbut the realities of game development made them difficult to announce. Remedy’s Sam Lake, Director and Screenwriter on the game, has also said he’d like to see it on PC, where the studio’s titles have traditionally ended up.

We’ve asked Microsoft for any comment on the matter and will update if they get back to us. Would you get Quantum Break on PC? It’s one I’ve had my eye on as a fan of ludicrously stupid sci-fi, but I’d need some evidence the shooting was fun and the plot remained at least amusing, if not necessarily coherent, to pick it up.