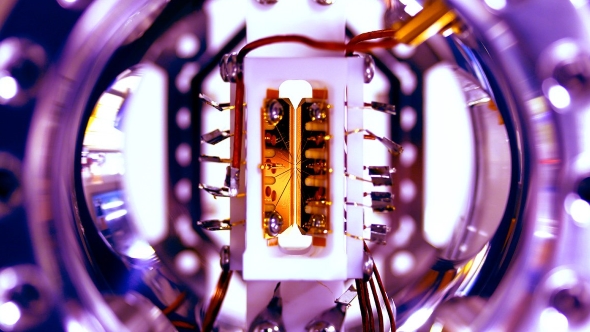 Researchers at the University of Maryland have created the first programmable quantum computing module, opening the way for post-binary PCs.

Currently our machines operate purely with 1s and 0s. In super-simple terms, our processors use billions of tiny little transistors, operating in either an off or an on state, to process complex binary code at high speeds. But just imagine the potential processing boost if there was a third state you could use… Go on, we’ll wait.

That’s the promise of quantum computing: it no longer just deals with mere binary. Because of the bizarre world of sub-atomic particles the qubits of a quantum computer are able to appear in either an on or off state, as well as a third state which is effectively being both on and off at the same time.

But creating a quantum computer is a massive technological challenge. Until now the devices which have been created in research labs were purpose built to process a single program and nothing else. The breakthrough with the project from the University of Maryland is that they have created a quantum module capable of being reprogrammed to tackle different problems only using software.

Being able to program the module lays the groundwork for such technology to be used in general purpose computers rather than the fixed function devices that the limited successes of quantum computing research has produced so far. 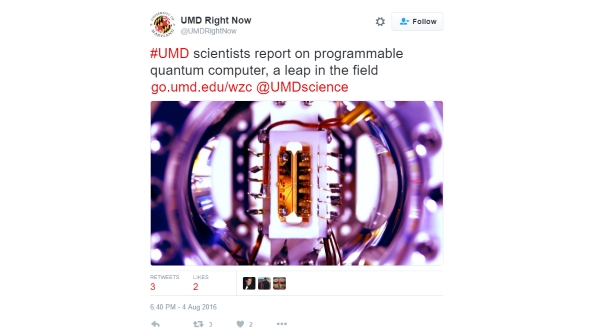 “For any computer to be useful, the user should not be required to know what’s inside,” said Professor Christopher Monroe, the project lead. “Very few people care what their iPhone is actually doing at the physical level. Our experiment brings high-quality quantum bits up to a higher level of functionality by allowing them to be programmed and reconfigured in software.”

That said, if an iPhone was powered by a processor which contained sub-atomic ion particles manipulated by different coloured lasers, I’d want to know. I might also be more inclined to don a tight-fitting black polo-neck and join the Apple cult too.

That’s what this quantum module is using – lasers. They’re used to alter the states of the ion particles this module has trapped in a magnetic field. The lasers are also used to create the necessary logic gates out of the device’s five ions and then read the quantum state of each of them at the end of the process.

“By reducing an algorithm into a series of laser pulses that push on the appropriate ions, we can reconfigure the wiring between these qubits from the outside,” said Shantanu Debnath, lead author of the research paper. “It becomes a software problem, and no other quantum computing architecture has this flexibility.”

At just five ions, or five qubits, the scale of what their quantum module can achieve is obviously limited, but they believe as many as 100 qubits could be contained in a single module. Separate modules could also be linked together, potentially like separate cores in today’s CPUs, using photons to transfer information between them.

I genuinely cannot wait for the day when I’m testing a new quad-module Intel Quantum i7. And maybe it’ll now happen before I have to retire…