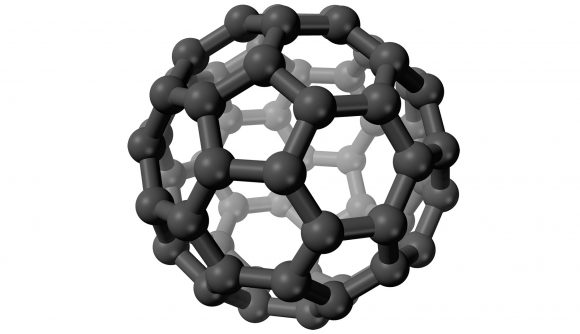 Eureka! Scientists have measured quantum energy levels within a buckyball – a spherical geomag only 60 carbon atoms big – another step towards supercharged quantum computers. Those 60 atoms are actually rather large on the molecular scale, and researchers are hoping this experimentation will one day open the door to building quantum PCs with a buckyball’s atomic building blocks acting as individual qubits.

Taking on a football-like shape, a buckyball is a molecular structure made up of many carbon atoms lying at every vertex. Their real name is Buckminsterfullerene (my new jazz pseudonym) referring to their fullerene form – structures made up of carbon atoms. Other fullerenes include carbon nanotubes, an often cited ‘material of the future’, with applications for a wide-range of PC hardware components: everything from SSD cooling to CPU packaging.

With the latest research from the University of Colorado and IMRA America allowing the quantum properties for each individual atom within the massive molecular structure to be analysed and measured, the way is open to one day employing a single buckyball as an entire 60-qubit quantum computer. Its network of identical carbon atoms providing the grounds for immense computational might.

“If we had a buckyball made of pure isotopic carbon-13, each atom would have a nuclear spin of 1/2, and each buckyball could serve as a 60-qubit quantum computer,” Jun Ye, one of the researchers, tells Scitechdaily. “Of course, we don’t have such capabilities yet; we would need to first capture these buckyballs in traps.”

Read more: They’re not quite quantum, but they are the best CPUs for gaming going

That might sound like a bunch of scientists running around a field attempting to capture the orb from The Prisoner. But, if achievable, these buckyballs could become foundational in 60-qubit quantum computers – that’s a whole lot of quantum computing power, too.

A quantum computer made up of 100 qubits could theoretically be more powerful than all the world’s supercomputers combined.

Quantum bits, or qubits, utilise the inherent nature of the tiny building blocks of our universe to exist in multiple, interconnected states all at once. While traditional PCs are limited to 1s and 0s, quantum PCs manage to be both 1, 0, and everything in between all at once in an entangled superposition. That makes them awfully powerful at chomping through algorithms traditional PCs can only dream of – especially those of a cryptographic nature. It might be a long while before we’re gaming on anything remotely quantum, however.

Of course, it’s a little tricky getting qubits to behave. They are incredibly sensitive to almost everything, and simply measuring their properties is half the battle. This research is still a long way off building a fully-functional quantum PC, but the buckyball’s unique shape could one day pave the way for quantum PCs to leave their infancy and start making waves in the computing world.

The likes of IBM, Intel, Google, and Microsoft are all currently racing towards realising our quantum future. IBM recently announced the first commercially available integrated quantum computer, the Q System One, which it has made available to the wider scientific and commercial community via the cloud.

If you want to delve right into the complex physics, the researchers’ paper is published in Science (via Gizmodo) – perfect if you’re partial to a little light quantum literature.