“We decided very early on that we should lock ourselves away and make something as strange as possible,” explains Quote’s lead designer Robin Lacey. Indeed, what do Italian philosophers and ‘90s Saturday morning cartoons have in common? Nothing. And yet overtones of both Umberto Eco’s The Name of the Rose and Cartoon Network’s finest can be glimpsed in every nook and cranny of this isometric brawler.

Quote is a game about burning books and feeding authors to a ravenous kiwi-like creature in order to purge the world of knowledge. Ostensibly, you’re the bad guy, an empty vessel sent by the tyrannical Bliss, God of Ignorance to destroy fiction and fact alike. In the surreal confines of the game however, you’re Novella, Priestess of Bliss, a heroic girl on a mission to cure the world of a blight that consumes everyone it reaches. 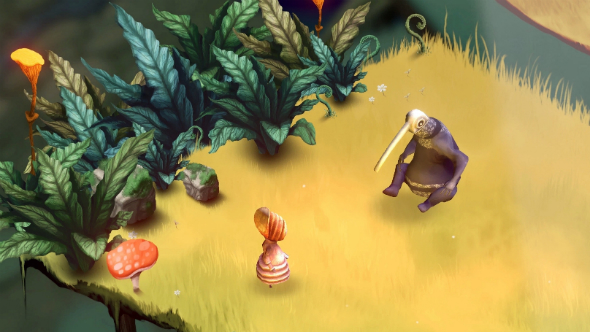 To perform this eradication you have to visit the various lands and peoples of Quote, track down any books or authors hiding there, and beat them to death. In terms of gameplay, that means searching levels for trinkets that might lure out an author, hunting down quotes in order to find the book that spawned them, fighting the corrupted inhabitants of a realm, all the while feeding every scrap of knowledge to your portly sidekick Tatters.

It’s a premise that calls to mind works of dystopian fiction like Yevgeny Zamyatin’s We and Ray Bradbury’s Fahrenheit 451, but doesn’t dare to patronise the player by basing its levels on particular works of fiction or using quotes from revered books. Quote is more about otherworldly exploration than it is a poignant statement on the perils of censorship and oppressive regimes. Refreshingly, this means that Quote can indulge in some of menace of the subject matter, without getting bogged down in its historical gravity.

Lead artist Evan Lovejoy’s surreal art design sustains that inferred evil, resting somewhere between the nightmarish works of Hieronymus Bosch and the cartoon friendliness of Aaahh!!! Real Monsters in its tone. Every level is hand-drawn on 50,000 pixel-wide canvases before being put into the game, ensuring everything looks organic and tactile. 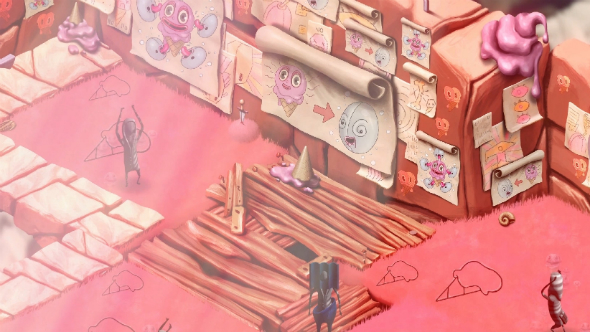 One level I was shown centered around a fishing village suspended in the air above a dilapidated library. The locals spend their days fishing knowledge out of the library in an effort to comprehend their purpose and situation. When we enter the village every building is boarded up, the adults have stopped working and the kids stay out late getting high and dancing to fairground music. The cause of the settlement’s malaise is knowledge, of course, but more specifically it’s a recipe for ice cream that one of the villagers plucked from the surrounding abyss. In an excited frenzy an ice cream factory was erected, but the locals didn’t foresee the effect the substance would have on their town. Your task is to shut down the ice cream factory and hunt down the minds responsible for it.

There’s whimsy in that scenario, tucked away in the jolly parlour piano music and delightful dancing animations, but it’s clear that knowledge has made this land evil. The source of the ice cream is an enormous, caged bovine. Its eyes are pinned open with calipers, its teats are clamped into suction devices, and its limbs are famished and gnarled. Meanwhile, the kids have become addicted to ice cream, violently defending it against anyone who seeks to take it away from them.

It’s here, surrounded by a mob of stoned children, that I’m shown one of Tatters’ other uses – beyond munching on authors and manuscripts, that is. Beat on Tatters for a while and it’ll start crying and whimpering, eventually bloating with upset and exploding, destroying everyone caught in the blast radius. It’s a characterful addition to the game’s simple combat system, which comprises of just three base moves: dash, push and punch. It’s mercifully easy to get the hang of, and more depth is promised through a progression system that lets you adopt special abilities, such as one where you open a book that causes Bliss’ face to appear, screaming at any enemies in your way and dealing huge amounts of damage in the process. Combat abilities can also be augmented by items that you find scattered across each of the game’s chapters. 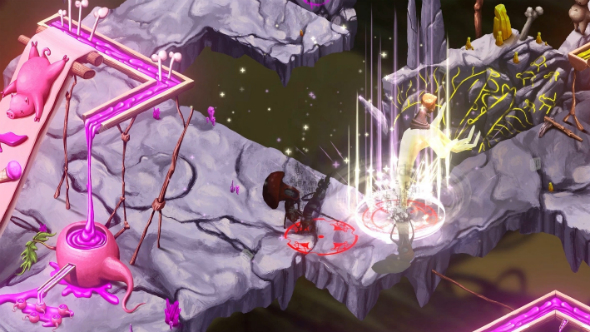 Every hit you land lights up your target and pauses the action for a split-second to provide immensely satisfying feedback for every attack you perform, especially heavy attacks like using the Bible of Bliss to bludgeon an enemy to death. Lacey hopes to have an endless dungeon system ready for when Quote’s first two chapters launch on Steam Early Access next spring, something for players to grind on while they wait for the next four chapters.

Whether there’s enough depth in Quote’s combat system to support that kind of gameplay is hard to say. As tactile and flexible as the game’s combat is, it’s the exploration side of Quote that serves as its real hook. Wandering through the game’s warped worlds is like a voyage through fiction and philosophy, each chapter a broad tonal palette containing everything from Vonnegut and Huxley to Rocko’s Modern Life and CatDog.

The bulk of the narrative is fed to the player via a mix of narration and rambling instructions from Bliss, which makes soaking up the story much easier than the game’s cryptic aesthetic would have you believe. That’s the side of Quote I can’t wait to see more of, something with the digestible narrative of the Trine series, but in a darker, more sinister package. And if two-man development team Vindit can assemble all the remaining pieces as imaginatively and evocatively as they have in the chapters I’ve seen, then the finished product will be one worth checking out.

If you’re interested in Quote and can’t wait until 2017, First Draft keys are available for half price from Itch.io until noon, 16 December.