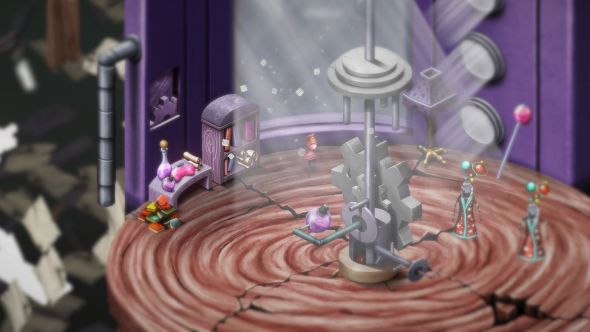 Darkly comic action-RPG Quote is now available on Steam early access. With a quirky art style and a unique premise – make the world dumber – the project drips with indie creativity.

If you’d like to know more – always a bad thing, remember – check out our hands-on impressions of Quote.

You’ll play as Novella, the high priestess of Bliss, god of Ignorance. Together with your book-gobbling avian sidekick Tatters, you’ll purge the world of wisdom, learning and literature, burning books and the nerds who produce them.

Developers Vindit named themselves after a ‘harmless shove’ towards the fictional religion of Bokonism, which espouses adopting pleasant untruths so you can feel better. Bokonism was invented by Kurt Vonnegut, an author Vindit cite as an inspiration alongside Hemingway, Carter, Borges, Bradbury, Eco and Huxley. If you too are a fan, what better way to pay them tribute than by ushering in the kind of ignorant dystopia they would hate?

Expect puzzle solving in the vein of Little Big Adventure, 40 unlockable abilities, secrets and lore to uncover, and “a mix of brawling action and exploration”. A fully-voiced narrator discusses your dark and witty journey through a surreal, weird world.

“2017 seems an appropriate time to be launching a game about a world in which truth and knowledge have been eradicated,” says Vindit founder Robin Lacey. “We’ve been building Quote for over two years already, working hard to make something very special – a unique world and story, all clad in darkly delicious, hand-drawn art. We’re so excited that people are finally about to see what we’ve been up to.”

Quote’s early access version will let you play the first two chapters of the game. More will be added as development continues towards a projected final release in “late 2017”. Early access players will have a say in shaping the rest of development.