A roguelike action-RPG might not necessarily be what you expect from Double Fine, but the instant you see Rad in action it’s clear that this is another of the studio’s unmistakably original titles. You can pick out bits and pieces from other titles – your character mutates like in Binding of Isaac, you leave a trail of flowers and green grass when you run as in Okami, and Rad is the latest in a line of games drawing on the oversaturated colours of the 80s.

Rad puts you in the aftermath of not just one, but two apocalypses – though project lead Lee Petty tells us that he “didn’t want to make a realistic, gritty post-apocalypse game where people were killing each other over food. Because that’s been done a million times.” Instead, the inspiration was the idea of being a teen living under the nuclear scare of the 80s. “I remembered how off a tangent Hollywood went at the time, and the early pen and paper role-playing games like Gamma World and other things like that, where they were very colourful. And even though it was a dystopia, there was this weird, colourful, neon-soaked upbeat quality to it.”

In addition to the colours of these apocalypses, the radiation that results from them is a bit friendlier too – continually imbuing you with new abilities. Defeating enemies grants you ‘rads’ which fill a meter, and every time it fills up you’ll earn a new mutation. Those will be major new abilities – things like wings for double jumps, or a hulking mutant arm which you can throw as boomerang at enemies. You’ll also be able to pick up smaller mutations in the world that give you direct stat bonuses.

“I was really interested in ‘What is randomness? Why do randomness?’” Petty says, “other than just replayability. A lot of it to me was unexpected drama – the surprise. Sometimes that happens in the level layout, and what enemies you’re fighting. But also, what happens if this time you’re playing it as a melee guy only, because you’ve got melee mutations, and the next time you’re playing as ranged, maybe one time it’s all indirect damage. I thought that was a very different take on it than when you always have the same sort of power, or you’re choosing a class-based character.”

You’ve got a simple three-hit combo with a basic bat and a quick dodge ability – and while that’s simple, it already feels tight and satisfying. Additional abilities and mutations just add to the strategy. I picked up an ability that let me drop a little mutant friend behind me, which can serve as a turret, a decoy, or an explosive mine – or all three, depending on how you use them. I was able to kite an aggressive melee boss around its arena, and whittle away its health in bits and pieces. 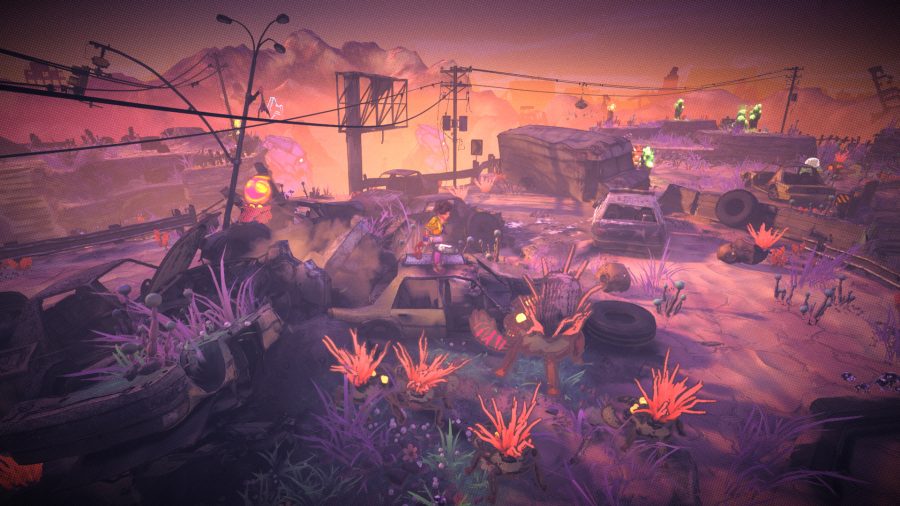 After defeating any given level, you’ll have the option to head back to town, and this is where you’ll be able to get the permanent upgrades you’d expect from a modern roguelike. Investing money in the shop will expand its inventory and improve its stock, so even when you die – and you will, a lot – you’ll be able to count on better stuff to take advantage of. An upgradable bank lets you enjoy perks like keeping some money when you die.

Rad is fully 3D, but the action is shown from an isometric perspective – and while that gives it a bit of a Diablo feel, you’re not stuck to the ground. You can jump, do some light platforming, and run aerial attacks and ground pounds against the enemies. But when you are on the ground, you leave behind a trail of restored greenery everywhere you go. Not only is it a lovely visual flourish, you move faster while you’re on the grass and get better combat ability. 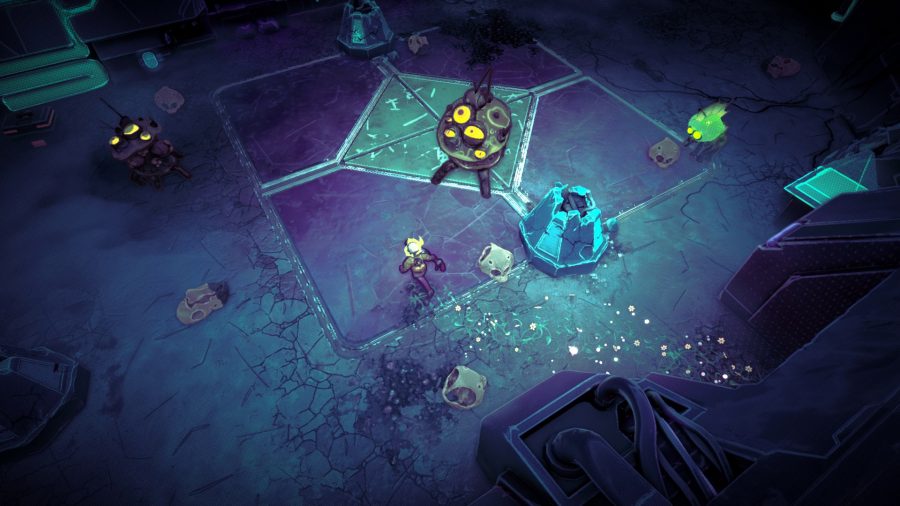 Petty says “retraversal is this double-edged sword, where people like exploring, but they don’t like having to retraverse every corner,” and the grass you leave behind deals with that problem directly. If you realise you’ve missed some far off corner of the map that might hide a nice pick-up, you can retrace your steps over the grass and sprint back to whatever that location is. That grass also gives you a clear indicator of where you have and haven’t been.

Rad already looks and feels great – a roguelike that blends snappy controls, varied random generation, and more free-form movement options than you’d usually expect from the genre. We’re set to see the full game launch this summer, so here’s hoping the final blend ends up just as, er, rad as this early taste.