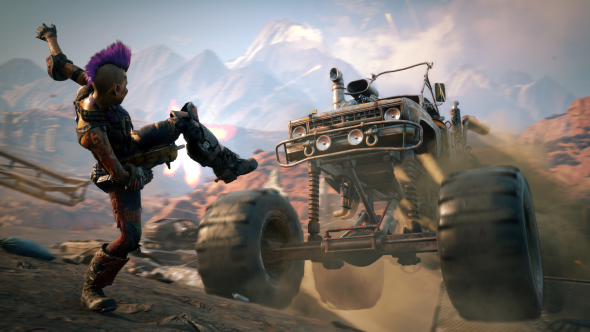 Id Software creative director Tim Willits has confirmed that the studio’s upcoming Rage 2 will not have loot boxes, but may embrace the ‘games as a service’ model.

It’s still a long wait for Rage 2, so in the meantime check out the current best FPSs on PC!

Willits revealed this in an interview with German site GameStar, which was later confirmed by USgamer. When asked if Rage 2 would use the ‘games as a service’ approach, he said, “yeah, we want people to play Rage 2 longer, and we think we can bring some fun stuff that makes it possible.”

He then added that they would talk more about this closer to the game’s release, which we learned earlier this week would be in 2019.

Willits does, at least, confirm that Rage 2 will not have loot boxes. “We will not have any loot boxes, I can say for sure. We have this novel approach: you buy the game and then you play it.”

The most recent open world title to include loot boxes was Warner Bros’ Middle-Earth: Shadow of War, and it received a lot of criticism for doing so. Last week the game finally removed all in-game microtransactions.

We should know more about Rage 2 very soon, as Bethesda will be showing the game at E3 next month.