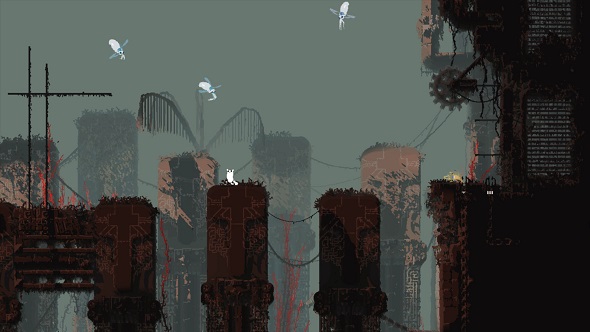 Following the release of sombre indie platformer Rain World, many players were initially entranced by slugcat’s struggle through a waterlogged wasteland, but frustrated by several design issues that made navigation needlessly difficult. In their first patch, developer Videocult has sought to address many of the issues which players raised, while still keeping Rain World as a sometimes unforgiving experience.

If you’re looking for games from the little guys, check out our list of the best PC indies.

According to Videocult, most of the changes were “low-hanging fruit that we think improves the player experience without taking anything away from the concept of the game,” so don’t expect slugcat to wield a flamethrower and jetpack in version 1.01. Most of the changes are to do with making movement that bit more fluid and preventing situations where players are stuck in challenging areas. This includes adding more karma flowers and food in certain zones to allow for constant player progression.

Slugcat now glows when it is underwater, so players don’t get lost in murky conditions. Slugcat has also been doing its breathing exercises, as its lung capacity has increased when swimming. Waterfalls are also a little less intense in some areas and turning is now faster when crawling through a tunnel.

Players now keep their map progress following a death, with Videocult saying that this change was proposed by “99.5% of players”. The map now features karma gate and shelter locations, with the karma gate requirements for the Shaded Citadel, Underhang and Drainage System being lowered to stop slugcats being trapped in difficult areas for too long.

There have been some other fixes, including the ability to now skip the opening cutscene but Videocult hopes these changes should alleviate the majority of the problems people are currently having with Rain World. More patches and content are planned for the future, but keep sending in your bug reports if you are still having trouble following this patch.