Want to know more about the Rainbow Six Siege Crimson Heist battle pass? Ubisoft has decided to switch from the year pass to a battle pass, scrapping the system that has been in place since the game’s inception. This change removes all of the VIP year pass privileges that used to be in place, perks like the 5% renown boost and discounted in-game items are no longer available.

The new battle pass system features a free and premium track – all players have access to the free track, but the premium track costs R6 Credits to unlock. There are over 130 rewards to unlock, including weapon skins, operator gears, and more. The Crimson Heist battle pass is active from March 16 to May 25, giving players 70 days to unlock all 100 tiers.

All of the items in the battle pass are exclusive, meaning you won’t be able to unlock them once the event timer runs out. Purchasing the battle pass will immediately unlock the new attacking operator, Flores. You do have the option of purchasing Flores separately using renown or R6 Credits, but this method won’t become available until March 30.

HOW MUCH DOES THE CRIMSON HEIST BATTLE PASS COST?

The free track is available to all players, however the premium track costs 1200 R6 Credits (£7.99 / $9.99). You also have the option to purchase the premium bundle which instantly unlocks the first 12 tiers for 2400 R6 Credits (£14.99 / $18.99). The battle pass can be purchased at any point during the event, immediately unlocking the rewards of the tiers you’ve reached. Unlocking the premium track will continue to give you the rewards for the free track.

WHEN DOES THE CRIMSON HEIST BATTLE PASS END?

You have 70 days to unlock all 100 tiers of the battle pass, starting from March 16 to May 25. Completing the premium track not only unlocks numerous cosmetics, there’s also a total of 600 R6 Credits on offer at various points in the premium track. This effectively halves the price of the premium track for dedicated players. 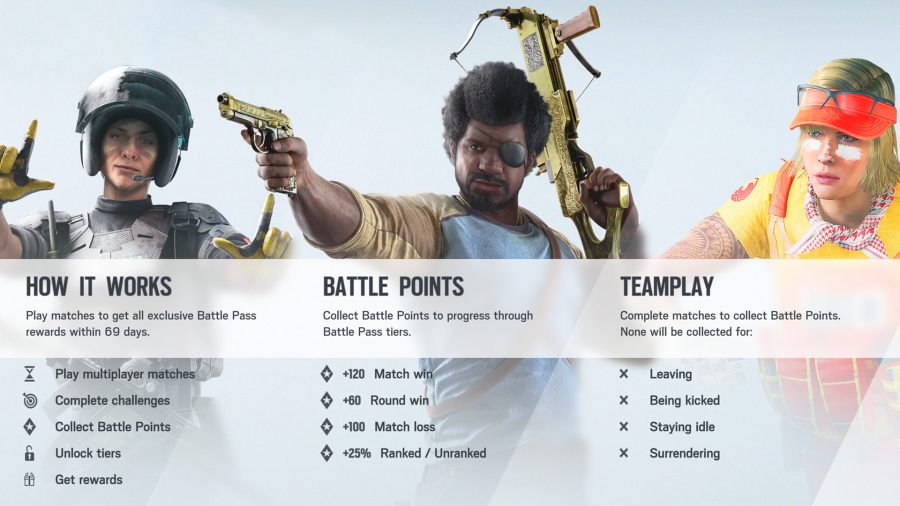 Unlock tiers of the battle pass by collecting battle points – you can do this by playing any multiplayer mode. Though winning every match 4-0 in ranked/unranked matches would be the fastest way to unlock tiers, players are also rewarded with battle points for a loss. You can complete community and personal challenges to unlock a chunk of battle points – be warned that these challenges do expire after a set period of time.

Here’s a breakdown of the amount of battle points you can earn during a match:

Players that try to idle their way through matches will be punished, stopping them from earning any battle points at the end of a game. It’s important to note you won’t earn any battle points if you leave, surrender, or are kicked from a match.

Yes, there are community and personal challenges in the Crimson Heist battle pass. Community challenges often give the Rainbow Six Siege community a task, for example, reach a certain number of shotgun kills. If the entire community accomplishes this task, every player is rewarded with battle points. Here’s the first set of challenges:

Returning players may be wondering where the daily renown challenges are – these were removed alongside the VIP year pass privileges.

And that’s all there is to know about the Rainbow Six Siege Crimson Heist battle pass. Find out how Ubisoft plans on adjusting the 20-second meta by reading our latest interview with the devs. We also have a detailed Rainbow Six Siege Year 6 road map to see what changes will be made to the game throughout the year.