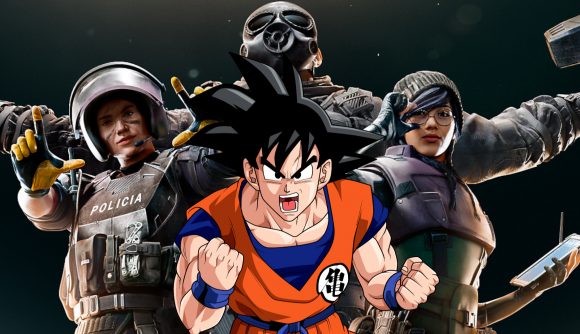 Sam Fisher will return in Rainbow Six Siege. Sure, that’s not exactly the new Splinter Cell game you’ve probably been wanting, but Fisher’s debut opens up something that might be even better – it ensures that Siege and Dragon Ball Z exist within the same fictional universe. Once again, the community has done the legwork to ensure we all have this extremely valuable information.

All credit for this journey goes to redditor ChiUnit4evr – please, follow that link and provide your upvotes. Reddit karma might be a pointless reward, but really, there’s no better way to say thanks for this journey.

Anyway, Sam Fisher’s Siege debut cement’s the game’s existing connection to the Ghost Recon series, since all three titles have had crossovers with one another. So how does that get us connected to Dragon Ball Z? Well, do you remember that time Ghost Recon had a Predator event? That connection blows the Siege universe – and most of popular fiction – wide-open.

Predator had a number of media crossovers (not just with Alien), including a Predator vs. Batman comic. That connects us to the DC universe, which also provides us with another crossover comic featuring Spawn. Spawn appeared in the Xbox version of SoulCalibur II, and Yoda and Darth Vader appeared in SoulCalibur IV. The equally-iconic Star Wars hero Admiral Ackbar appeared in the GBA RPG Dragon Ball Z: Buu’s Fury.

From Dragon Ball Z to Jump Force, you can connect Rainbow Six with most of the notable shonen anime of the past few decades, from Naruto and One Piece to My Hero Academia and JoJo’s Bizarre Adventure. Yare yare daze indeed.

You can also trace back the lineage other ways. SoulCalibur guest characters alone will get you connected to Link (with connections to the Nintendo-verse through Smash Bros), Geralt (for Witcher action), and Kratos (for God of War into PlayStation All-Stars and a wider selection of Sony titles).