Rainbow Six Siege Ember Rise brings some game-changing gadgets to the game, and now we know exactly what weapons, secondary gadgets, and utility will accompany Amaru and Goyo when Year 4 Season 3 arrives.

The first thing to note is that once again, neither of the two new operators will bring any new weapons into play, echoing Operation Phantom Sight by recycling classic weapons from other operators. However, this time around the choice of weapons should prove a lot more popular with players.

We’ll start with our two armour, two speed female attacking operator from Peru, Amaru. Her gadget is the Garra Hook, which propels her at seven meters per second up hatches, walls, or even through barricaded windows. She gets four uses of this gadget, which makes her exceptionally effective at applying pressure from multiple angles, and one of the fastest operators in the game at getting on site. Amaru can only travel through already broken hatches, she can’t traverse downwards with the Garra Hook, and she can’t break through Castle’s bulletproof barricades.

For primary weapons, she can equip the Supernova shotgun – this time with an optional suppressor attachment – or IQ’s sorely underrated G8A1 LMG. Fortunately, Amaru can break down hatches herself as she can choose Mira’s ITA12S shotgun as a secondary, or the SAS SMG11 if you prefer to frag. As for secondary gadgets, you get the pretty standard choice of breaching charges or claymores.

Our two armour, two speed Mexican defender Goyo can place down three Volcán Shields down as his primary utility. These look and act much like the new deployable shields, except they have an explosive charge that can be shot out from the back of the shield, destroying the shield, dealing damage to anyone nearby, and setting a significant area on fire for 12 seconds. This can be used to stall attackers by cutting off access to the site temporarily, or to kill them outright if they’re too close. These pair well with Kapkan traps as they will automatically detonate the shield and kill whoever vaults over. Having three of these also soaks up a lot of utility from the attacking team. 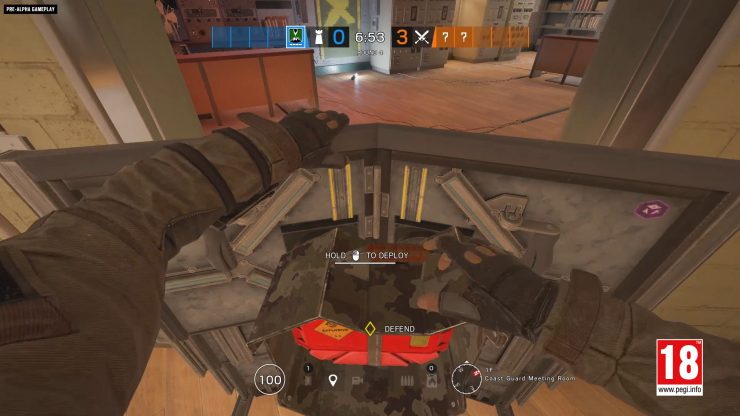 Goyo can take Mira’s Vector .45 ACP SMG or Kaid’s TCSG12 slug shotgun as his primary weapons, while he can only carry the P229 pistol as his secondary. Like Kaid, he can either take impact grenades or nitro cells, all of which makes him an incredibly versatile op.