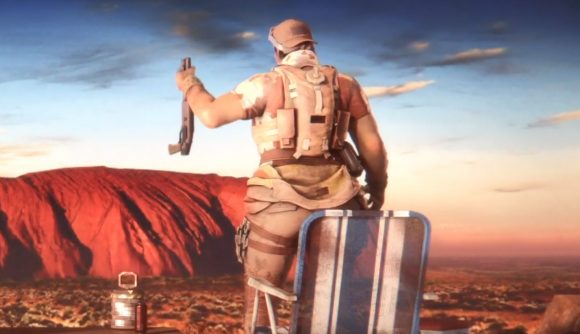 February 12, 2019 We’ve just got our first official look at one of Burnt Horizon’s new operators.

Ubisoft has given us our first official look at one of the new Australian operators coming in Year 4 – the one early leaks referred to as Mozzie. At the end of a new trailer hyping up Year 4, we see her looking on the Outback, standing up out of a lawn chair, and pumping a short-barrelled shotgun. Her stocky frame and backwards cap closely match the previous leaks, so it looks like they’re going to be a good indicator of what to expect.

We’ll see more of the new operators in the Year 4 reveal this weekend, but according to the leaks, Mozzie is the defender and her gadget allows her to take control of enemy drones that come into contact with it.

The first leak shows a very blurry, cropped image of two operators in a Rainbow Six Siege menu screen with a typical Australian outback scene behind them. The character models look reasonably credible albeit blurry and low-res, but worse-looking leaks have proven true for previous Siege seasons.

A Resetera member then posted a purported description of the two new operators: “The next operators are called Mozzie and Gridlock. Australian ops.” According to the post, Gridlock is an attacker who place a red web trap, which damages defenders who run into it and makes a noise.

To prove their point the Resetera member also posted an image of what they claimed to be Gridlock’s red web trap – like with the first image it’s very blurry, but it looks quite realistic.

Finally, another Redditor posted a larger version of the menu screen leak, which shows a bit more of the two Australian ops.

The video above offers our official look at one of the new ops – though just in a brief clip at the very end.

The Burnt Horizon release date will give us all a hands-on opportunity with the new ops, but in the meantime we’ll get a load of new details at the Six Invitational this weekend.