The latest Rainbow Six puts you alongside the greatest combat operatives in the world in explosive siege scenarios. Get the lowdown and find out how you can score the game for free with a new GTX GPU.

It’s been seven years since the last Rainbow Six game – Vegas 2 – but Ubisoft’s tactical team shooter is back and in explosive form.

Tom Clancy’s Rainbow Six Siege is the eighth game in a series that’s been tickling our tactical combat glands since 1998, and while its team-based action will be familiar to fans of the previous games, this time around it’s taking a slightly different, more claustrophobic approach. As the name implies, it’s all based around siege situations and close-quarters confrontations in indoor environments, as a Rainbow Six squad battles to take control of a stronghold held by a team of skilled defenders.

Each team is made up of Operators, drawn from a pool of 20 specialists from five renowned special forces units: France’s GIGN, Germany’s GSG-9, the UK’s SAS, Russia’s Spetznaz and, from the US, the FBI SWAT unit. Each operator has his or her own perks, abilities and equipment, and if your team wants to succeed then it’ll put together a squad with a range of abilities that covers all the tactical bases.

In addition to the Operators, each team also feature one Recruit: a custom player whose skills and gear can be set up specially for each match to ensure that the team is ready for anything that the other side can throw at them.

Preparation for each match is essential: the relatively small and cramped environment means that the actual fighting can be over quickly, and the game won or lost on the basis of a single tactical decision. So before the match starts the defending team needs to prepare by fortifying key areas, setting traps and creating choke points, while the attackers can send in drones to scope out the environment and identify targets, and pick locations from which to deploy their attacks.

It’s all about teamwork, tactics and tension, with a sizeable helping of destruction along the way; Rainbow Six Siege features a procedural destruction system that means, with the right equipment, you can blast your way through anything. So if you’re on the attack and you know that there are defenders in the room below you, you can set a breach charge on the floor to blow a big hole in it and unleash death from above – assuming you have an explosives specialist on your team. You can also attach explosives to walls to create pathways or new lines of fire, or you can simply shoot through walls; however the game’s realistic bullet penetration system means that you won’t do as much damage that way. 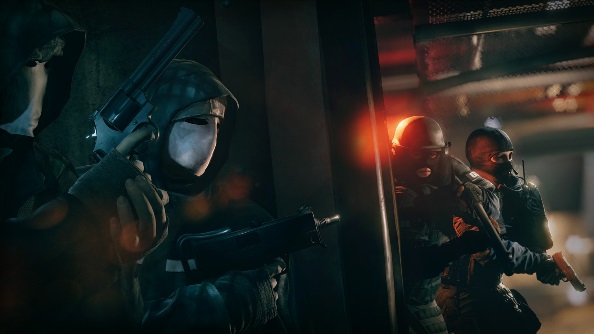 Bear in mind, too, that the defenders have plenty of tricks up their sleeves to thwart your attack. When you’re on the defending side you can prepare for the oncoming assault by reinforcing walls and doors, setting up fortified barriers and shields, and deploying things like barbed wire and mines to slow down the attacking side.

As well as the full-on multiplayer game there’s a Hostage mode where the siege is further complicated by the need to extract a hostage, while Terrorist Hunt mode is a cooperative game in which up to five players take on waves of AI enemies, and there’s a single-player campaign that you can also play cooperatively if you feel you need a bit of backup from friends.

You can also hone your elite assault technique by going to Ubisoft’s Art of Siege to take part in a series of five field training programs that will familiarize you with the different fields, strategies and agent specialities that Rainbow Six Siege has to offer.