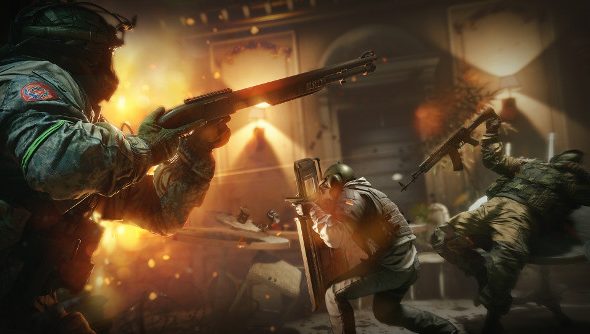 Ubisoft have instituted a zero tolerance policy when it comes to cheating in Rainbow Six: Siege. If you feel like using third party software or a modified version of the client to make up for your impotency, then be warned: you’ll probably end up permanently banned, even if it’s your first offence.

On the lookout for more great shooters? Take a look at our list of the best FPS games on PC.

An update to the code of conduct for Siege warns cheaters that their nonsense won’t be tolerated.

“Cheating/Modding/Hacking: Player is running a modified or otherwise unauthorized version of the game client or a third party software which provides any sort of unfair advantage (wallhacks, aimhacks…) or causing detriment to other players’ experience: Maximum penalty is permanent ban on first offense.”

Given the severity of the punishment, Ubisoft are also working on better differentiating between cheating and just playing the game really, really well.

“Being an online competitive game and considering Rainbow Six Siege’s unique features of destructibility and intel gathering, certain challenges come with community reporting,” reads the update. “For example, a player getting a head shot through a wall is quite commonplace. This has potential to create a perception that someone is cheating.

“While this is sometimes the case, we are working hard to differentiate reports of players who are coordinating with their team for information (how the game is meant to be played), and from someone who is maliciously altering the experience with third party software.”

Have you had any matches ruined by cheaters?