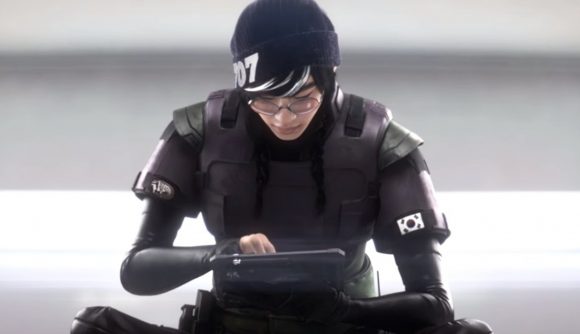 Rainbow Six Siege cheats have stepped their tactics up a notch, as several players have come across game-ruining exploits over the past few days. From invisibility to flight, players are compiling cocktails of cheats allowing them to polish off enemy teams before rounds have even started.

The first example, which you can check out towards the bottom of this article, involves a player using Sledge. Making themselves invisible and giving them the ability to run straight through walls, they sprint into the middle of the unsuspecting defending team. One by one, they take each of them out with Sledge’s hammer, winning the round before anyone can fire a shot.

In another example, posted to Reddit, a defending player is using Doc. Instead of running through walls like a chump, they jump straight through the ceiling, raining down bullets from above (with startling accuracy), cleaning out all but one of the attacking players. Once they hit the ground – having apparently taken no fall damage – they finish off the last remaining player to win the round.

These newest batch of cheats haven’t gone unnoticed by the community. Plenty of players have commented regarding similar experiences on both Reddit and Twitter in the past few days. Pro player Niclas ‘Pengu’ Mouritzen tweeted about the latest hacks, saying that although he hasn’t seen them himself he’s seen several examples posted on social media.

Getting outplayed in prep phase. from r/Rainbow6

The timing of these new exploits is unfortunate, as it coincides relatively closely with the introduction of enforced two-factor authentication to the game. Ubisoft’s intention was for 2FA to be part of its ongoing anti-cheat methods, but it seems that that’s not currently working quite as intended.