Forget the gadgets, the guns and the destructible environments, Rainbow Six Siege is really about teamwork. Live as a team, win as a team. Everything else leads to quick and violent failure. That’s very much the message being promoted by developer Ubisoft Montreal, and it’s one that fits with my own experiences of counter terrorism operations. Virtual ones, obviously…

Will Rainbow Six Siege join our list of the best first-person shooters on PC?

While there will always be suspiciously talented individuals that prefer the lone wolf approach, to adhere to such a path here not only risks you letting your team down, it also locks you away from much of what makes Siege potentially so rewarding. That sensation of a group objective well met – each team member pulling their weight in a way that helps others perform their own jobs better – trumps anything to be gained from the loner role.

“It has always been about tactics, working as a team, communicating properly and really setting out with a team focus for everything you do and try to do,” explains Ubisoft Montreal’s Chris Hendry in response being queried on what ‘makes’ a great Rainbow Six game. “We really want people working together, which is partially why we added the Operator system… different synergies exist between different Operators if you work together properly.

With this desire to stick to the core of what has made past Rainbow Six games so beloved, that staunch dedication to communication and teamwork, it should come as no surprise that Siege as indeed a more diverse and impactful experience when played with cohesion in mind. 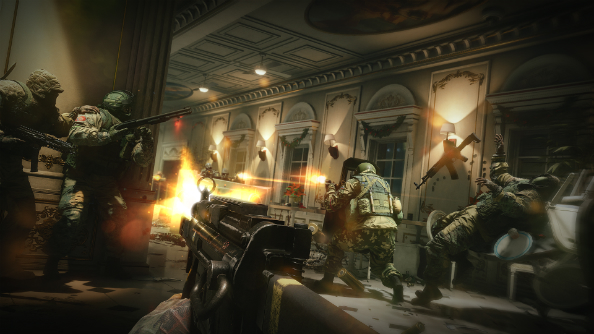 The Operator system mentioned by Hendry, which sees each player equipped with different weapons and gadgets to those used by their squad mates, can be read as a means to very actively encourage players to think about their allies as much as they think about themselves. While each Operator is equipped with enough firepower to hold their own in the right situation, the diversity of options provided by pairing different skill sets together opens the door to much more sophisticated and unpredictable angles of attack.

Sledge, for instance, carries a huge hammer that can be used to destroy blockades in a single swing. It’s an incredibly useful tool for storming enemy held territory quickly, but without the support of someone like Fuze, who is equipped with a gadget that can drill through walls and fire off a cluster grenade into an adjoining room, you’re likely to get killed as Sledge as soon as any blockade is destroyed and you’re revealed.

Combine that basic level of teamwork with the layers offered by two other Operators and your four-person team suddenly finds itself with an incredibly wide range of strike options. The question then becomes: do you specialise and become an expert in a single Operator class (of which there are 20), or do you become the ultimate utility player and work to become proficient in all areas?

“I think most people mix and match their Operator class at the beginning,” suggests Hendry, “although much of that decision comes down to people choosing to use something that they think they’re going to be comfortable with. I think that’s common when new people play for the first time and I think it’s a good way to introduce them to a new game. 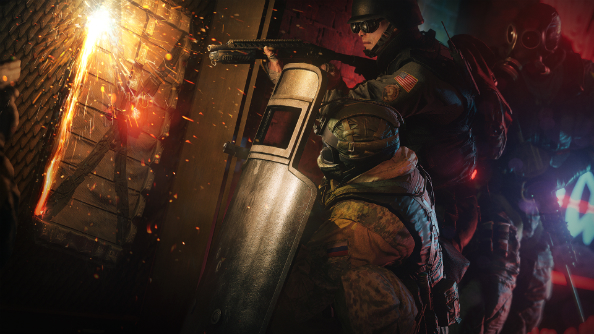 “We give players opportunities to allow themselves to get used to using a certain Operator and, after they’ve learned and understood what is possible there, they then move onto new Operators once they’re comfortable enough to experiment and learn more ways of playing.”

What’s still in question, though, is whether the majority of players are going to dedicate themselves to the game in such a way that gives them the best chance to fully understand those possibilities. Many a tactical shooter has found it difficult to generate the desired tone once the game has been released across public servers, the majority of players not prepared to spend the time required to uncover and execute upon the nuances inherent to ‘good’ play.

Having lots of Operator options in order to facilitate very tactical, team-centric play is one thing, but you need to surround yourself with others prepared to play cerebrally if you’re to avoid bumping into more casual players with nothing but running ‘n’ gunning on their mind.

“There’s always going to be a difference between casual and competitive play,” responds Hendry to the concern. “There will always be people who are more comfortable in a casual environment and don’t want to use their mic all the time or have the pressure of other people heavily relying on them.

“Then, you get people who only want to play more serious ranked matches. In those instances we’ve already noticed that players communicate much more readily and they make friends with each other so they can play with the same groups moving forward. It was really cool to see that happening in the beta – people really getting into it and thinking a lot about which Operator each team member is going to use, and that sort of thing. 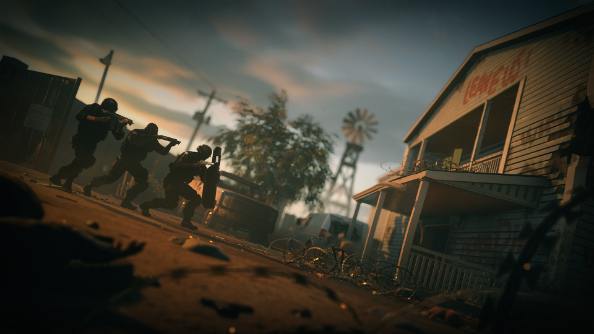 “I think the game does a really good job of making people feel comfortable when it comes to communicating and working as a team. In the beta we didn’t have a ranking system or ranked match options, but people were still making sure to play as a team and they were talking to each other a lot to make that happen. That was really neat to see.”

Whatever the case, whether playing competitively or casually, the hope is that you’ll always be able to find matches populated by others coming to Siege with a similar mindset to that of your own. Ultimately, those playing casually (and enjoying it) are likely to want to evolve their game and test their skills by entering the ranked arena.

To help this process along Ubisoft Montreal has promised that it will not be splintering the community into individual sectors. Maps released post-launch will be free to all players in order to keep everyone together, which will hopefully rid Siege of the have/have not problem that has divided audiences of other shooters due to their short term, money-hungry approach to new content.

Keeping everyone together means that weaker players always have the chance to be matched against, and learn from, more experienced individuals. That constant merging and sharing of knowledge should, in turn, lead to better matches down the line.

“The game will evolve over time as people work out what is possible and learn from tactics other people are using,” says Hendry. “There’s nothing negative about that process. The fact that people are learning as they go means that the game won’t become mechanical or predictable. Once people have learned more and more about the game, that’s when they’ll see it really start to live and breathe. “