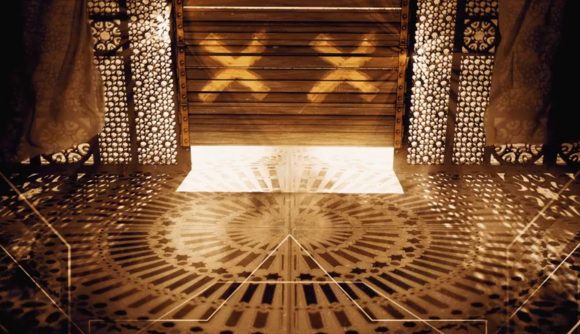 Ubisoft has begun teasing season for Rainbow Six Siege’s next big update in Year 3 Season 4. It’s a glimpse at the Morocco map, which is an addition we’ve expected since the official roadmap detailed the setting for Season 4 ages ago. This is the first time we’ve gotten a look at the new location, and though it’s an expectedly vague tease, it does give us a clue about what to expect.

We’ve got a fancy bit of wall and flooring, with intricately detailed tile patterns throughout and some gently flowing curtains. That suggests we’ll see a palatial setting – something grand and opulent with, perhaps, a focus on close-quarters battle. The Arabix text in the tweet below translates to English as “Welcome to Morocco.”

That’s not much detail, but according to Ubisoft’s typical pattern of reveals, we’ll find out more soon. Expect further similar teases throughout the week. The map will be joined by two new operators, also from Morocco, and these three things will make up the bulk of new additions to Siege for Y3S4.

It’s not the most auspicious time for Siege, though. “Aesthetic” changes aimed at cutting back on blood, skulls, and nudity for the game’s Chinese release has the community in an uproar, and the apparent removal of the Standard Edition from Steam has also contributed to a recent review bomb. The latter, at least, is an already-corrected mistake, but it may be difficult for Ubisoft to generate much excitement around the new season as fans continue railing against other changes.