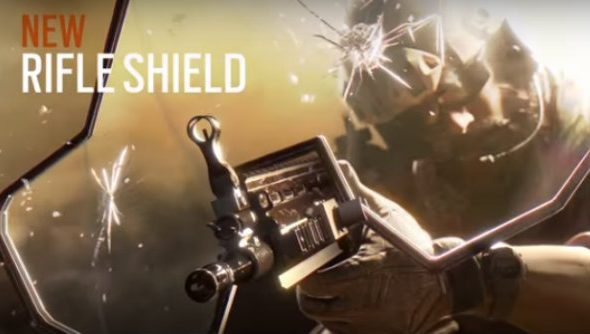 Some more details have rappelled, swung and breached their way into our email inbox for Rainbow Six Siege’s next chunk of free content, Operation Dust Line.

Personally, I think Rainbow Six Siege was one of the best shooters of last year. Here’s some more shooty goodness in our list of PC’s best FPS games.

We already knew the expansion was bringing the new ‘Border’ map, along with two new operators from the US Navy SEALs, but let’s have a refresher in case you didn’t. The female operator, Valkyrie, can deploy Sam Fisher-style sticky cameras that can be accessed by anyone on the team, while the male operator, Blackbeard, has a rifle-mounted shield that protects his magnificent beard from small arms fire.

See the new operators and the new warzone, which is apparently “the most destructible and open map to date”, in the trailer below:

The update also comes with a couple of changes to the base game, with players now able to customise their operators between rounds. This is a welcome one, as it’ll allow players to be more reactive to the opposition, picking loadouts to counter that of the enemy. Another gameplay tweak allows players to cancel the placement of gadgets, opening play up to a bit more psychological warfare.

There will also be a post match screen showing the winning team and highlighting the most valuable player.

Additionally, there are a host of tweaks to existing operators, with Ubisoft adding side protection to Montagne’s shield and making Tachanka’s machine gun easier to place, among others.

The new map is free for everyone starting on May 11, which is when Season Pass owners gain instant access to both characters. Everyone else has to wait until May 18 to unlock them, which can be done using in-game currency Renown or the microtransaction-based R6 Credits.