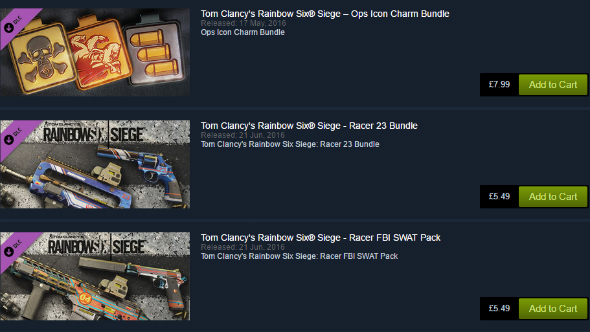 It turns out you can teach an old dog/occasionally derided French publisher new tricks. Ubisoft has announced detailed, year-long DLC plans for Rainbow Six Siege. Not only is such upfront, long-term planning admirable, but Ubi is also giving away every major piece of post-launch content for price of zero.

Has all this relative DLC generosity got you feeling frugal? Then check out the 101 best free PC games.

In a blog post on the official Siege site, Ubi outlines what you can expect from the delayed online shooter after it launches on Dec 1st:

“We’ll be actively supporting Rainbow Six Siege with gameplay balancing and tweaks (plus detailed patch notes), events and competitions, and four major content releases with no paywall on gameplay content.”

Here’s a handy DLC roadmap in visual form. What an age we live in: 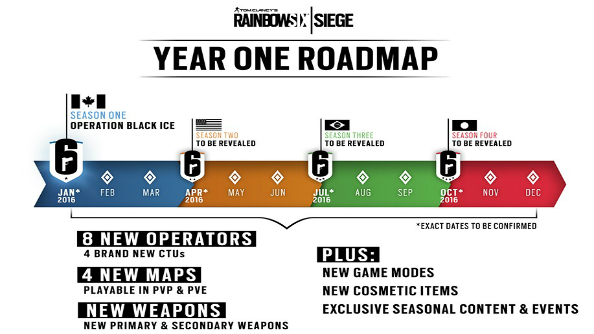 All maps and modes will be free and immediately made available to everyone, regardless of what version of Siege you buy. As for those new Operators… well, they’re going to require a little extra legwork to unlock:

“New Operators and most weapon skins can be unlocked with earned currency called Renown, or with R6 Credits,” reads the blog post. The latter cost real money, and buying a new Operator will set you back 600 R6 Credits, which works out at £3.99. C’mon, it wouldn’t be a Ubisoft game without a little smidge of paid microtransactions.

Thankfully, you don’t actually need to cough up real human pennies to unlock those delightful, door-busting marksmen, who can still be earned through the game’s entirely free in-game currency, Renown. Although you best carve out a hefty chunk of time if you’re planning to unlock them this way, with Ubi speculating each DLC Operator will take around 25 hours to unlock – though those available in the main game on launch can be earned much more quickly.

The next year of DLC will be released in ‘seasons’, with each one coming with one new map, two fresh Operators, new weapon skins and gameplay upgrades. Certain premium weapon skins will cost money, though Ubi is adamant these are “purely aesthetic and have no impact on gameplay.” Comfortingly, the publisher also insists “it’s imperative that we don’t create a divide in the community or introduce “pay to win” mechanics.”

After years of gamers’ change purses being savaged by cynical season passes and expensive Assassin’s Creed outfits, it’s refreshing to see Ubi introduce such a seemingly generous DLC plan. It’s almost like they shouldn’t keep fleecing us for extra cash after we’ve already stumped £50/$60 for a game on launch. Anyway, kudos to Rainbow Six Siege. Here, have some goodwill.