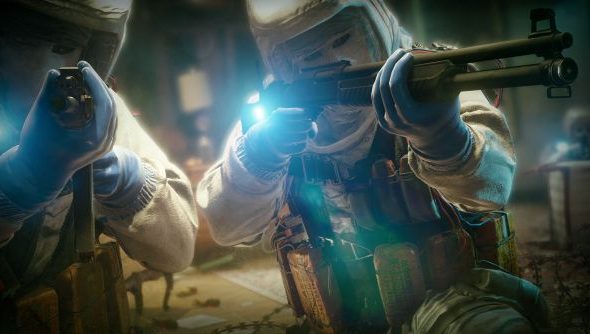 Just when you thought Rainbow Six’s “Siege the day” promotion couldn’t be topped, they’ve gone back to the well of amazing ideas and decided that Shakespearian quotes are the best fit for a game where you chuck grenades through windows, rappel up the sides of buildings and gun down swathes of terrorists. In case you’re worried you’ll miss it, the full one minute run-time of the following trailer is that quote, and it makes sure you know where and when it’s from at the beginning.

Some FPS games worthy of the bard in our best of list.

There’s very little slow-motion or famous dead poets in the actual game, but you can play it for free in the open beta right now. After some problems in set-up, it should now be stable and working. You’d also hope that any prep work for the inevitable launch-day flood will have been dealt with now and it should be smoother than your average FPS launch.

We’ll find out on December 1st. It’s on Steam for – Great Scott! – £49.99 / $59.99 / €59.99 or the same via Ubisoft directly. Thanks to Black Friday you can almost certainly get it cheaper elsewhere. We’ll have a port review of the final version for you as soon as possible.