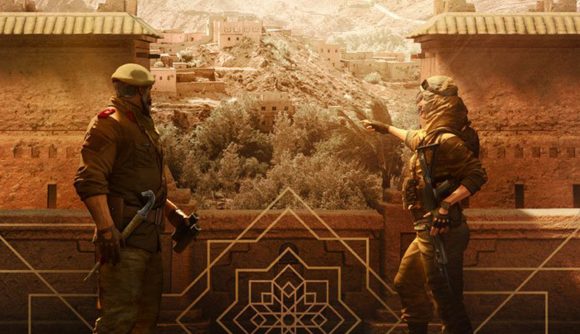 After a regional Ubisoft account let the name of Rainbow Six Siege Operation Wind Bastion yesterday, the company has now confirmed it and given us a preview of the two operators that will be coming with it. We don’t yet have names, but we do know that we’ve got a male defender and a female attacker, as well as a hint of what they’ll look like.

Both Moroccan operators hail from the GIGR. The defender is “the Commander himself,” “stationed at the country’s legendary kabash.” There he trains new recruits and helps shape Moroccan special forces.

The attacker is a world traveler who’s been through the Sahara, Alps, Asian rainforest, and the Arctic Circle. The blog post says “she’s an expert on environmental operations with a knack for pushing the enemy back.”

Those descriptions don’t offer much gameplay detail, but we might be able to infer that the attacker will have some sort of traversal ability or gadget. She’s equipped with a rifle in the teaser image, and the defender has a pair of binoculars and what looks like a sort of concealed blade.

There’s also just a bit more detail on the Morocco map, which is a “renowned fortress located in the Atlas Mountains.” There’ll be “unprecedented roof access,” and an oasis located “right next door.”

We don’t yet have a Wind Bastion release date, but we’ll find out more throughout the week. As expected, the full reveal will happen on November 17 and 18 as part of the Rainbow Six Pro League Finals.