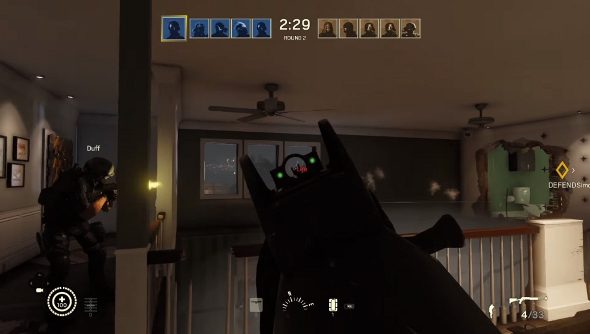 The trend of shooters stealing control away from players is an inexplicable one. Increasingly, interacting with the environment – beyond shooting – has been chucked out in favour of micro-cutscenes, where players are forced to watch their characters do things, absent any control.

Rainbow Six Siege is not going down that path. It’s a skill-based shooter where precision is key, so the trappings of the cinematic shooter don’t really have a place in it. It’s in stark contrast to Ubisoft Montreal’s other shooter series, Far Cry, which espouses freedom but frequently takes it away.

“A split second is all that it takes for everything to go completely haywire and find yourself on the losing end of a bullet,” says the developer. “Rainbow Six Siege is highly lethal, and whether you’re on attack or defense, positioning yourself in effective cover is paramount to success. Counter-terrorist units act precisely with total control of their movements, and we’ve established some design principles to capture that feeling, give you freedom of movement and room for experimentation, plus expand your tactical options while utilizing cover.”

Ubisoft Montreal’s desire to give players back control has led to the creation of nine rules:

“Enforcing these rules results in something that is fully input driven, meaning you have total control of what is happening on the screen at all times. You’ll never be stuck in a contextual cinematic animation where you’re at the mercy of whatever the game is making you do. For example, finding yourself locked at an awkward angle while taking cover, or loss of reactivity while performing an extended melee action. Always being able to aim and shoot is a design priority, and every action you might do which would need both of your hands to be accomplished (like putting a breach charge on a floor), can be cancelled in a blink of an eye, giving you back your ability to shoot instantly.”

Rainbow Six Siege is due out next year.