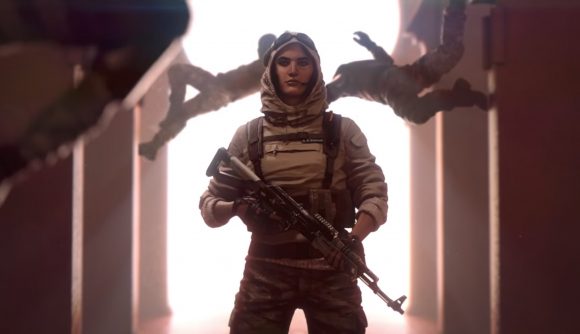 Rainbow Six Siege Wind Bastion isn’t even out yet, and its operators are already getting nerfed. After a handful of days on test servers, Kaid and Nomad will both see their abilities knocked back a bit to bring them in line with other operators ahead of Wind Bastion’s launch. In particular, you’ll now be able to act before Nomad’s Airjab stunlocks you.

Airjab no longer detects targets while it’s in motion, and there’s a 1.5 second delay between the moment when the warhead sticks and when it activates. That’ll give you a chance to actually fire back before the ability blasts you off across the stage. That won’t negate the substantial effects of the stun, but it will give you a split-second chance to fire back or get to relative safety before it goes off.

Kaid’s also getting some changes, but they’re a bit less substantial. He’ll now have two electroclaws, and you’ll only get two points for deploying them. These changes haven’t been as desperately requested as the Airjab nerf, but they should knock down Kaid’s utility a bit and bring him more in line with other operators.

Other changes are coming, too. IQ’s gadget detection range will be increased to 20 metres, and you’re going to take significantly less damage when using melee against electrified barbed wire. The .44 Magnum is also getting increased recoil to help tone down its power. Those are all the balance changes noted, but you can see the full list of bug fixes over on Reddit.

The Rainbow Six Siege Wind Bastion release date is coming up soon, and you can follow that link for much more info on what to expect when it launches. Or just hop onto the test server and see the new features in action for yourself.