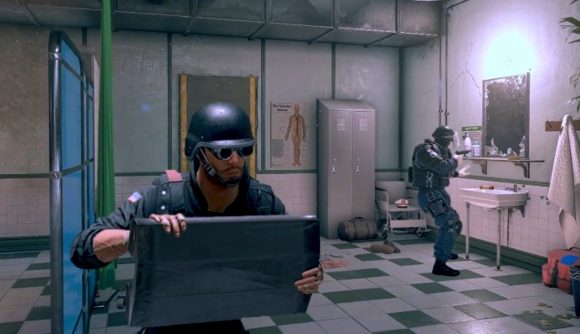 In what is certainly an unlikely mashup, someone’s remade the intro to medical comedy series Scrubs in Rainbow Six Siege. Through some clever editing, a popular YouTuber has been able to stage the full opening in the multiplayer game, theme tune and all.

The video was posted on Reddit. Using an in-game green screen and some clever editing, YouTuber JollyPirateDonut recreates the memorable 15 second sequence that opened every episode of the TV show with remarkable accuracy. In case you aren’t a Scrubs aficionado, the intro involves all a character walking on-screen in a hospital ward with a chart, handing it off to another, who then places an x-ray chart on a backing light. The main characters all fade between being the person walking and being in the background. It’s hard to explain, you need to watch it to understand.

It’s not easily replicated, and here JollyPirateDonut has done a very admirable job given he’s using in-game footage from a frantic FPS game. An operator carries a package from one door to another in the map Fortress, changing across some 14 operator types, before placing the explosives on an opposing ball and blowing them up. The footage was captured using green screen tools from an old version of Nvidia’s GeForce Experience, which he then cut together and placed the song over it. Aside from being mirrored, it’s distinctly recognisable, and makes for a catchy lead-in on his latest YouTube video.

We got a look at what’s coming for Rainbow Six Siege over the next few months thanks to some leaks. A puppet-themed deathmatch is in-line for October, just in time for Halloween, and some footage of Lord Tachanka’s rework has spread online as we head into the Rainbow Six Siege Shadow Legacy release date.

See the Scrubs intro as made in Rainbow Six Siege here:

I made a Scrubs Siege Intro from r/Rainbow6

We have a rundown of the newest operators to Rainbow Six Siege, and everything you need to know as Rainbow Six Siege Year 5 continues to roll on. If you want more Scrubs content, stars Zach Braff and Donald Faison are rewatching it and providing commentary in a new podcast.