Ubisoft is looking at changing the way it deals with teamkilling in Rainbow Six Siege. With a coming update to new season’s test servers, players who kill a teammate will have the damage revered onto them when they attack a second allied player.

Historically, teamkilling in Siege has been handled by kicking a player after they’ve killed two teammates. Under the new system, there would still be amnesty for players who have killed a single teammate, but once that’s happened, they’ll absorb all the damage they do (or attempt to do) to their allies.

This allows for the accidental teamkill, which can easily happen in tense moments or when things get particularly chaotic. But Ubisoft wants to limit the ability of a single player to ruin an entire match by eliminating two members of their team before getting kicked out.

The idea here is that Ubisoft wants Siege to remain dangerous and risky, and for players to have to stay conscious of each others’ positions and lines of fire. This new system will limit the ability of teamkillers to exploit that danger, since after one friendly fire incident, they’ll be the ones getting damaged.

The changes were announced today at the Six Invitational in Montreal, along with the Rainbow Six Siege Year 4 roadmap: 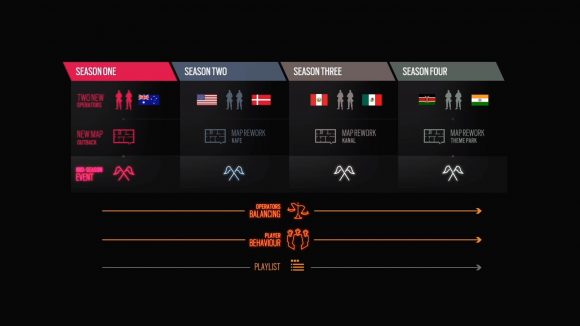 On Reddit, the response has been mixed: while players there are pleased to see that the Siege team is working to address teamkilling, some are convinced that trolls will quickly find ways to use the new system for griefing purposes.

We’ll have to wait and see how it pans out. The new system will go live on the new season’s test servers, and Ubisoft will be watching to see how it works. If it does the job and reduces teamkilling as intended, it will be rolled out into the main branch at a later date.